NASHVILLE — Abigail Alexander shuffled through a stack of papers trying to find instructions for logging in to her school-issued laptop.

The 10-year-old chatted with her best friend, a fellow fifth grader, about who is in their classes this year at Head Middle Magnet Prep in Nashville and what period they have a specific teacher.

Their conversation Tuesday sounded like a typical one between excited, anxious students on the first day at a new school — except this year’s first day of school was like no other.

Abigail was seated in the dining room of her North Nashville home while her two younger foster siblings played around the table. Her friend was on FaceTime, the phone propped up against the side of Abigail’s laptop.

The girls were among more than 86,000 Nashville students who started the school year virtually while their schools remained closed due the ongoing spread of the coronavirus.

Two states away in Indiana, where additional school districts opened with in-person instruction on Wednesday, the state’s health commissioner said cases in schools are inevitable, calling them a “reason for action” and not a cause for alarm. Dr. Kris Box said outbreaks can be prevented and schools can reopen safely if they follow state recommendations and families screen for symptoms at home.

“The best way to prevent this is for everyone to do their part,” Box said, “and know when to stay home.”

But while students and families cope with questions about how to keep themselves safe while they learn, reminders of the risk come at them from all directions: News of COVID-19 cases reported in schools that have reopened, plus street marches and car caravans in dozens of school districts across the country protesting what activists called “unsafe” school reopenings.

Abigail and her friend had their own concerns; both experienced access issues — to technology, school resources and the other services that schools offer millions of students across the country.

“I need help!” Abigail exclaimed, as her laptop again failed to load or connect to the internet.

Setting the stage for the nation

Despite increasing COVID-19 cases across Tennessee, most of the state’s school districts are reopening in person this month, and some of the suburban districts that surround Nashville and others in East Tennessee were among the first in the country to welcome back students after they closed in the spring.

These districts set the stage for others across the nation that will be resuming classes in the coming weeks. Nashville students’ success — or failure — with virtual learning will help inform what many of the country’s largest school district’s face. With the announcement Wednesday that Chicago students will begin the year remotely in September, six of the nation’s seven largest school districts will open online.

For many, the debate between reopening schools or learning from home has been a fraught one.

Parents, educators, elected officials and even doctors haven’t agreed on the best course of action for the country’s students.

The American Academy of Pediatrics initially recommended schools reopen, but as President Donald Trump has pressured districts to do so, the group said that local public health agencies must make recommendations based on evidence. The group said reopening plans should start with the goal of getting students back in person, but in some communities schools may have to start back virtually.

Dr. Anthony Fauci, director of the National Institute for Allergy and Infectious Diseases and the nation’s leading expert on the coronavirus, told teachers during a virtual town hall last month they’d “be part of the experiment” of reopening schools.

That’s small comfort to many educators, students and their families. The Tennessee Education Association and local teacher associations have joined many others around the country in calling for districts to delay reopening by holding mock funeral processions, “die in” protests and arguing that teachers will quit. New York, Chicago and Milwaukee were among the cities and school districts that saw similar protests, even as parents who are reluctant to send their children back to school also lament districts’ online learning plans.

And it hasn’t taken long for new COVID-19 cases to emerge among those districts across the country that have resumed in-person instruction.

At least 14 confirmed COVID-19 cases connected to schools have already been reported in Tennessee, and two school districts have closed schools or altered their schedules as a result of exposures to the virus. More cases have been reported at reopened schools in Indiana, Kentucky, Mississippi and Georgia.

Even some school districts that have yet to reopen have been affected. After Georgia’s Gwinnett County Public School teachers gathered July 29 for in-person planning, 260 employees were excluded from work the following day due to a positive case or contact with one.

For families, and even teachers, worried about exposure to the virus at school, most districts offer some sort of remote learning option, but many parents say they need to send their children to school regardless of their fears.

In Indianapolis, Taylor Fenoglio stood at the bus stop Wednesday morning, crying after watching her daughter Izzy get on the bus for her first day at Thompson Crossing Elementary School. Fenoglio already missed her.

Izzy? Not so much.

“She’s been dying for the interaction and was really excited,” Fenoglio said. “She pretty much ran onto the bus.”

That morning Izzy had posed for first-day-of-school pictures next to a chalkboard sign with date and a drawing of a face mask – something that’s quickly become a symbol of the 2020-21 school year. While the state is requiring masks only for students in grades 3 and above, Franklin Township Schools is requiring them for all students (with exceptions for health and other conditions).

The district also offers a virtual option for families who aren’t ready to send kids back to school. Fenoglio said she and her husband discussed whether to go that route. But, with a new baby at home, Fenoglio worried she wouldn’t be able to give her older daughter the support she needed for a successful start to kindergarten.

The unknowns of reopening schools in the midst of a pandemic made the stressful process of navigating school for the first time even more difficult, she said. But by the end of the first day, with her daughter home, happy and exhausted, Fenoglio said she feels good about their choice.

“We are carefully optimistic about this year,” she said, “and just really hoping it goes well.”

Many parents calling for schools to reopen worry about the quality of the remote instruction their children will receive.

Most districts have cobbled together virtual instruction plans with students logging on to various learning management platforms to access self-paced course content or join live video meetings over Zoom, Google Classroom or Microsoft Teams with their teachers and classmates.

But many districts across the country have called for more funding from state and local governments to provide technology and internet access to students, even while they face threatened funding cuts from the federal government if they don’t reopen.

Some students and families were able to get online to join live classroom meetings or check in with their teachers on personal devices for the first day, but some of those dependent on devices provided by the district were left in the dark, exacerbating fears that gaps will continue to widen between vulnerable students who come from economically-disadvantaged families and more affluent peers.

Heather Powell interrupted her work day to let her son, Hawkes, 6, use her work laptop to log in to a virtual meeting with his first grade class Tuesday morning.

The Powells had tested both their children’s laptops the day before by logging on, but come Tuesday morning a Metro Nashville Public Schools network issue rendered the laptops useless for the time being.

“It already disrupted my workflow this morning,” Powell said. “It worked today, but it won’t work for the long term.”

Powell’s daughter, Sophie, 9, was at a friend’s house as part of a learning pod that morning, but only one child had a personal device she could use to log-in.

The struggle to balance working full-time at home, keeping both her children engaged and meeting their social-emotional needs are why Powell tracked down learning pods for her children.

Parents across the country have turned to learning pods, or in-person microschools, for their kids while schools are closed. Some are banding together with nearby neighbors and others are linking up with classmates from the same school or grade level and hiring private tutors or teachers to lead instruction and provide child care.

Costs vary and some schools are helping families connect with each other, while in some cities across the country families are dolling out hundreds of dollars to pay for private instruction or to send their children to “virtual learning camps.”

In some areas, families are pulling children out of the public school system to send them to private schools that are reopening in-person or to homeschool with their own curriculum instead.

Both of the Powell children’s pods will stick to Metro Nashville Schools’ curriculum. The student will rotate houses each week, Powell explained, with the family serving as host. She hopes the tutor will relieve the burden on the working parents, so she can concentrate on work while the kids are learning.

As for the first day, Powell called it quits and took the second half of the day off after the frantic morning. She and Hawkes were going to go to the pool.

“I think that’s what we need today,” she said.

When families don’t have options

Abigail’s mother, LaTonya Alexander, isn’t sure what she would have chosen for her children if she’d had a choice in Nashville.

She and her husband have had to shift their work schedules so someone is at home at all times with her three children and two foster children, ranging from kindergarten to 12th grade.

Alexander’s daughter, Anaya, is an exceptional education student and a senior in high school. Her son, Wilton, is starting the 10th grade. Both would prefer to be at school, Alexander said.

She has more confidence that older children could have taken health and safety precautions like wearing masks, washing their hands and social distancing seriously. Remote learning is more difficult for younger students.

LaTonya Alexander is a hair stylist and her husband a barber, so exposure is already a concern. As a Black family, they are also among the Americans who are getting infected and dying at disproportionately higher rates than white people.

So the Alexanders are dependent on the laptops distributed by Metro Nashville Public Schools. With five kids in the house, there isn’t enough work space — much less technology — to go around.

The family picked up four laptops, among more than 34,000 that the district has distributed to students so far, a day before the first day of school, but the youngest, a kindergartener, doesn’t have a device.

“I wish I could meet my teacher,” the kindergartner said Tuesday morning.

Instead, she sat quietly next to Abigail at the family’s dining room table, snacking on grapes and watching the other children try to log on to their computers.

Thu Aug 6 , 2020
The federal government could be on the hook for millions of dollars in refunds to users of online court records after an appeals court ruled Thursday that court administrators illegally included a wide range of expenses that were never authorized to be recovered from the public. The U.S. Court of […] 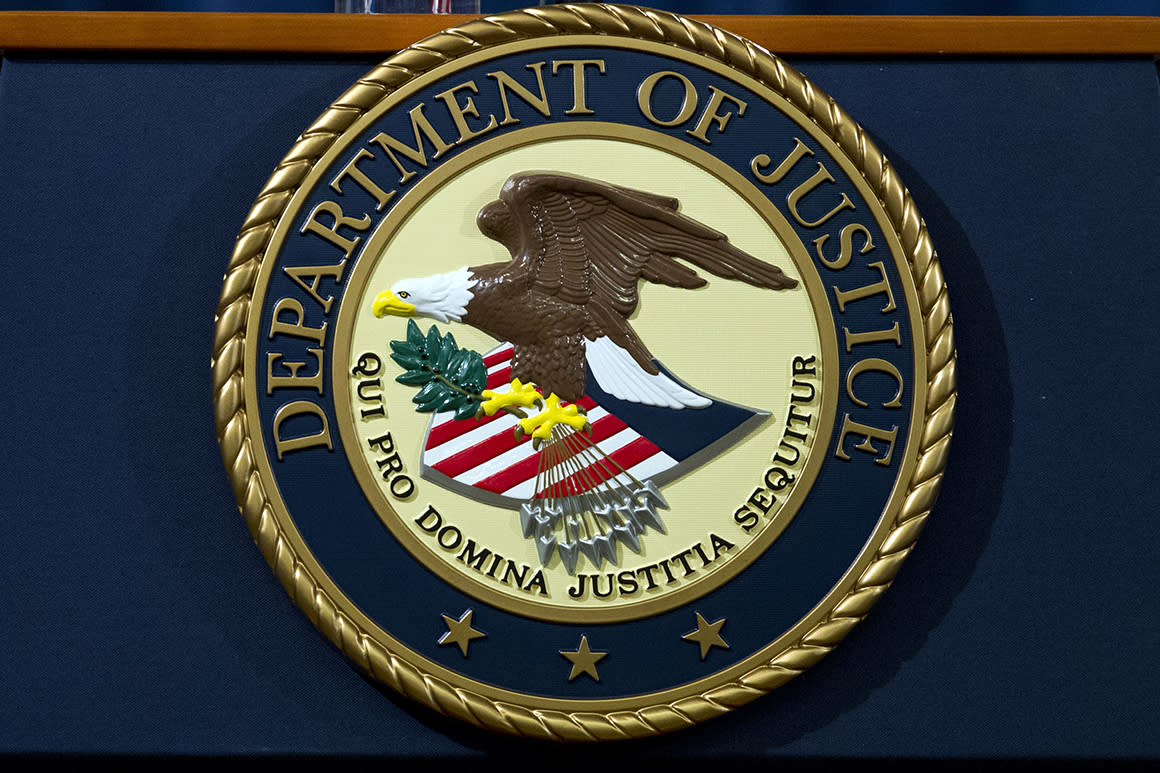