When Jean Franzblau, the founder of Cuddle Sanctuary in Los Angeles, first heard of a contagious virus spreading across the globe in March, she set stringent policies for all participants: wash your hands the moment you arrive to a cuddle; don’t come if you feel ill; if a client appears sick or is coughing, a cuddle session leader may send them home.

“We implemented that for two events, a Wednesday and a Saturday. And then we were closed,” said Franzblau, who won’t reopen until a vaccine is made widely available. “It was so quick: here’s our new protocol and then our protocol is we’re closed. It was very intense and very dramatic.”

Professional cuddle organizations like Cuddle Sanctuary aim to provide clients with a sense of calm and bliss, thanks in part to the anxiety-reducing hormone oxytocin which is released in response to positive, social touch, like a hug from a friend or a nuzzle from a dog. First popularized in the early 2000s, professional cuddling aimed to fulfill touch needs for a range of clients including survivors of post-traumatic stress disorder and sexual assault and adults on the autistic spectrum. Now, there are dozens of independent professional cuddling organizations, like Portland’s Cuddle Up To Me, and larger networks of professionals like Cuddlist, who have trained hundreds of touch facilitators nationwide.

Related: Nordic Cuddle therapy – would you pay £65 to hug a stranger?

Research has shown that without physical touch, we’re likely to experience loneliness, depression, anxiety disorders and stress. As the pandemic presses on, clients regularly accustomed to getting their touch needs fulfilled by professional cuddlers struggle to find that relief. But professional cuddlers are finding a way to provide an approximate feelgood sensation from afar. Franzblau and some of Cuddle Sanctuary’s professional cuddlers – those who have completed four online courses, including a 12-day training – are offering virtual cuddle sessions on Zoom.

Initially, Franzblau was staunchly against the notion of a virtual cuddle. Without skin-on-skin contact, there would be no way for oxytocin to flow. “I was resistant on a very deep level to offer something that I thought would be value-less or seem like snake oil,” she said. However, after consulting with Cuddle Sanctuary professional cuddlers, the group created a format they believed could leave clients feeling good, albeit only with emotional buy-in from both parties. “There are two elements that must be in place: expertise on behalf of the professional and the willingness to try something new on behalf of the client,” Franzblau said. “We must meet each other halfway to make the magic.”

Usually, in a one-on-one cuddle session – which ranges from $80 to $100 an hour and is held in a private room either in the client’s home or the cuddler’s workspace – the client and cuddler first go over current stressors and then engage in an open dialogue about where the client wants to be touched. In group sessions which take place at the Sanctuary and last two hours, a professional cuddling facilitator leads attendees through icebreaker and consent exercises, like how to kindly decline an unwanted hug from a peer. Consent is integral and sessions are always fully clothed, no sexual touching allowed.

Online, similar communication still has to occur, but in the absence of interpersonal touch, cuddler and client situate themselves in comfortable positions in their homes, visualizing the sensation of being held by another person and massaging themselves.

After self-quarantining alone for over a month in New York City, actor and writer Randy Wade Kelley noticed he, like many others, craved human connection. The 37-year-old had never tried professional cuddling in the flesh, but he was introduced to Cuddle Sanctuary through a friend and decided to give the virtual experience a shot in June. A virtual cuddle session, he imagined, would consist of snuggling with pillows and stuffed animals. Instead, he was instructed by Franzblau to recall a pleasant cuddling experience from the past and to lie in a manner that simulated an embrace. Lying on his side, with one arm stretched beneath his head and the other close to his torso, Kelley reveled in his own grasp while Franzblau supervised from nearly 3,000 miles away.

After, Kelley said he felt as if he’d spent the week meditating. In the weeks since the virtual cuddle, he’s returned to the side-lounge position as a way of self-placating when he feels lonely. “There’s no substitution for human touch, but it definitely helps bridge the gap,” he said. “I’m so thankful I’m able to cuddle myself.”

The client’s openness in learning to self-soothe in the absence of a physical embrace from a professional has been one of the greatest opportunities for growth, said Fei Wyatt, a professional cuddler with Cuddle Sanctuary. “I can’t make them feel something by touching them,” she said. “They have to pay attention to their own body. My clients are being asked to be a lot more aware, pay a lot closer attention and take responsibility for that.”

In addition to touch, emotional awareness is integral to the practice of therapeutic cuddling. Asking a stranger to stroke your hair or caress your back requires vulnerability – and in the process, cuddlers and clients build a verbal and physical rapport. In the midst of the pandemic, to compensate for a lack of physical intimacy, Shawn Coleman, a professional cuddler in Chicago, held virtual events promoting emotional togetherness. Inspired by the 36 questions psychologists believe promote feelings of closeness, Coleman hosted nightly Zoom meetings where participants would answer a question a night for 36 days.

While Coleman, who uses gender-neutral pronouns, won’t host an in-person cuddle event at least through the end of the year, they see value in reminding clients of the importance of physical and emotional connection. “We can try to get creative during this time in order to find a way to get our needs met,” they said. “For some people, it’s very much around touch, but also for some people it’s not a touch requirement, it’s a connection requirement or an intimacy requirement.”

For Teron Mobley, a furloughed restaurant worker in Chicago, virtual cuddle sessions more easily facilitate an emotional bond through meaningful eye contact, something the 35-year-old struggles with in his daily life due to social anxiety, he said. After a year of monthly professional cuddling sessions with Madelon Guinazzo, the co-founder and director of training at Cuddlist, an online directory and training platform for cuddle therapists, Mobley experimented with his first virtual cuddle in early June. Because he can’t currently touch Guinazzo, he built intimacy by gazing into her eyes on his computer screen. “It’s a powerful thing to look into someone’s eyes,” Mobley said. “After that I was like, hmm, actually, this could work. We can’t actually cuddle but it’s some sort of connection.”

Mobley is open to another virtual session but eagerly awaits when Guinazzo opens her books for in-person sessions. She has no plans at this time to do so, she said. For both cuddler and client alike, nothing quite compares to the real thing.

“It’s like when you’re used to having your favorite meal, let’s say lasagne, and then somebody says here’s a substitute lasagne,” Guinazzo said of the virtual cuddling experience. “It’s OK as long as you’re expecting it not to taste like lasagne.”

Wed Jul 22 , 2020
Riyadh (AFP) – A Jordanian couple in Saudi Arabia burst into tears of joy to be among the chosen ones for next week’s scaled-down hajj pilgrimage, but countless rejected applications have stirred resentment. For the first time in modern history, millions of pilgrims outside Saudi Arabia have been barred from […] 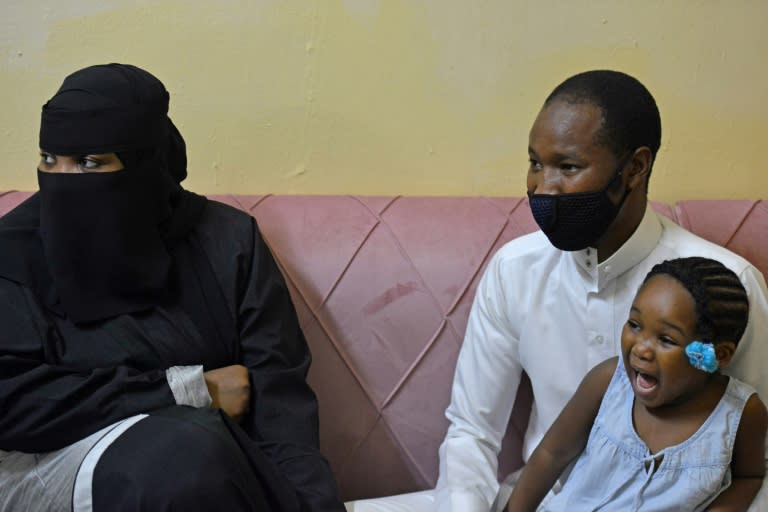