As retail reopens around the U.S., pop-ups are popping up more than ever.

For the past few years, these temporary retail spaces were all the rage for companies seeking a relatively inexpensive way to test the brick-and-mortar waters. The strategy was so successful with both brands and landlords that pop-ups were pervasive on seemingly every street in urban areas around the country.

Then the pandemic hit and all retail locations were forced to close, including pop-ups. Now that brick-and-mortar sites have begun reopening, the landscape is markedly different. Consumers are still wary of going back to stores as the coronavirus continues to have a profound effect on the way we live our lives. Retailers have had to institute wide-scale changes in how they operate to convince customers that it’s safe for them to return — masks, gloves, Plexiglass shields, constant disinfecting of high-touch surfaces, and more.

Add to that the fact that as many as 25,000 stores may close permanently this year as a result of the pandemic, according to Coresight Research.

That translates into a ton of empty space that landlords will be scrambling to fill. And pop-ups may once again be seen as a potential savior for these real estate companies, many of whom are trying to navigate the double-whammy of empty storefronts and delayed or non-payment of rent from those retailers that remain.

But the pop-up of 2020 is going to be a different animal. Like the rest of retail, there will be more virtual components and a whole new set of rules that will define the new normal for experiential retail.

“Pop-ups are going to turn into something more creative,” predicted Jan Croatt, chief executive officer of Winston Retail Solutions. She said her company is currently working on a COVID-19-related kiosk concept for Westfield’s malls that will sell masks and other protective products.

“We’re working with three large mall developers on how to innovate and make it more compelling for people to come back to their properties,” she said. “We’re also in strategic discussions with retailers to put curated pop-ups in their stores.”

She said this can help fill some of the extra, unwanted space in large retail locations. Pre-pandemic, Kohl’s negotiated to rent out a portion of the space in some of its stores to Planet Fitness, for example. And many malls are redeveloping their space to add offices, hotels and grocery stores. Although this was an idea Winston was working on before the pandemic, Croatt said the current situation has accelerated the demand.

Experiential retail is also going to change, she said. Instead of encouraging potential customers to touch and feel products, there are going to be a lot more demonstrations where shoppers can watch how a product performs and then place orders safely from their mobile devices. “Customer service and brand ambassadors are going to be more important than ever,” Croatt said.

Sarah Ivory, cofounder of Self Employed, a Los Angeles-based experiential marketing agency, said the proliferation of pop-ups over the past several years was predicated by online brands “looking for a real-life connection with consumers.” But the reality of living in the time of coronavirus means these pop-ups “can’t be executed like they were before.”

So Self Employed partnered with INVNT, a New York-based events management company, to develop virtual pop-ups instead of physical ones. Ivory describes it as the 2020 version of QVC, where shoppers are invited to a live event hosted by someone like Kylie Jenner to promote her Kylie Cosmetics collection that they can view from the safety and privacy of their own homes.

In the past, an event like this would have popped up in a Los Angeles mall, but by making it virtual, it allows more people from around the country to participate. “It’s a major draw for people to catch a glimpse of her live,” Ivory said. Attendees, who can buy tickets to participate in the event, are able to ask questions and watch Jenner demonstrate the products herself.

“It’s almost like having personal FaceTime with her,” Ivory said.

Ivory’s partner, Anita Gallo, said that as Americans get used to living in a COVID-19 world, she expects physical events will start up again, probably by the holiday season. But the impact of virtual pop-ups will remain. “There’s an opportunity to connect virtual to physical events,” she said. “They don’t have to be mutually exclusive,” Ivory added.

Self Employed works closely with Westfield and had opened several physical pop-ups in its centers before the pandemic. Now, it is producing personal protective equipment that the company’s 32 centers across the U.S. can sell to customers when they reopen. The kits include a branded face mask, handless door openers, hand sanitizers and even a note of encouragement in tote bags that read: So Happy to See You Again. “We’ve created hundreds of thousands so far and see that number tripling by the end of the year,” Ivory said. “It helps welcome back customers and provides a sense of security. They’re branded and reusable and are good advertising for the center.”

Melissa Gonzalez, ceo and chief pop-up architect for Lionesque Group, said the idea of pop-ups started as a trend but quickly became mainstream, driven by direct-to-consumer brands that weren’t ready to commit to five-, 10- or even 20-year leases. “It gave them the ability to test prototypes, layouts, square footage in a shorter timeframe with lower risk.”

However, with the pandemic accelerating the popularity of online shopping, these brands are benefiting from their e-commerce roots, and as a result are “rethinking what purpose retail serves,” Gonzalez said.

While they may still be open to trying brick-and-mortar, the experience is going to be different — at least for the next few months. “We’re working on offering different experiences that don’t depend on touch and feel,” she said. That includes takeovers of store windows of existing stores and making those windows shoppable.

“There are going to be more curated, story-based, highlight moments with more infusion of color, scent and sound,” Gonzalez said.

Although most brands are taking their time, she expects that by the fourth quarter of this year and into 2021, pop-ups will begin to make their return. “I think there will be pent-up demand,” she said. “People will still want to interact and get out. While traffic may be down, the engagement with the brand will be deeper and longer.”

Eric Shea, managing director of digital retail strategy for Accenture, said: “During the pandemic, we haven’t seen a lot of physical pop-ups but we saw digital pop-ups, especially in the apparel space from Ted Baker and others,” he said. “Coming out of COVID-19, I think we will see pop-ups come back but how they use the spaces will be different.”

Shea expects to see more “stores outside the store,” where brands use window displays to showcase product and customers who purchase will be pick it up outside in the street. “It’s like curbside pickup, but that will evolve and become more sophisticated for the customer who doesn’t want to enter a store anymore. We saw that with Best Buy and I believe it will cross over into fashion as well.”

Stores will continue to play an important role in the future and customers will eventually return, Shea believes, but their demands will have changed. “We’ll be adding more digital or even virtual reality to the experience,” he said. “Consumers still want discovery and expert advice that they’re not getting online yet.” And brands that are exploring livestreaming of fashion shows and other events are finding customers are responding.

“It’ll be interesting to see how fast traffic will come back,” he said. “But until then, virtual pop-ups will play a role.”

Jay Norris, ceo of Guesst, a technology company that operates co-retailing/consignment shops called Pop-Shares, expects long-term leases to be a thing of the past. “A lot of tenants just want to do a short-term test,” he said.

And while participating in a Pop-Share fits the bill, these spaces too will change as a result of the pandemic. “Window shopping will become more prevalent as people opt not to shop in stores,” he said. “That’ll be the wave of the future: you can see something in a window, go online and buy it. It still starts with bricks but it’s now bricks-to-clicks where the brick-and-mortar is more like a billboard.”

Norris believes pop-up spaces that employ this type of strategy will start to take hold this summer and pick up steam for back-to-school. “Retailers big and small will have to test it,” he said. “There’s a lot of merchandise out there and this is the great reset in terms of financial perspective, consumer behavior and how we work and live. We have to create safe, COVID-19-free places and somebody will become the ambassador for that. Things are going to be done differently, it’s just another channel for retail.”

Justin Kerzner, president of the Naked Retail Group, which operates collaborative stores with a rotating cast of brands, said that the company’s stores at 11 Howard Street and on Mulberry Street in Manhattan used to host events that drew 120 to 200 people. “But at least for now, people won’t feel comfortable with that, so we’ll do 50-person events in the space and livestream to the others.” He envisions selling tickets or memberships that will determine who will be allowed to attend.

“I think retailing will adjust and be different,” he said. “There are always ups and downs but people still want to discover new things and are seeking physical experiences — as long as they’re safe.”

Kerzner said that with landlords faced with an abundance of empty spaces, they’re open again to working with companies on pop-ups. “I’ve had a number of calls from landlords saying they’re open to ‘amicable terms,’” he said. “They’re scared but real estate and great properties have always been the best investment. Things will bounce back but you have to be practical and be ready to sustain and rebuild.”

Fri Jul 10 , 2020
PHOENIX (AP) — International students worried about a new immigration policy that could potentially cost them their visas say they feel stuck between being unnecessarily exposed during the coronavirus pandemic and being able to finish their studies in America. The students from countries as diverse as India, China and Brazil […] 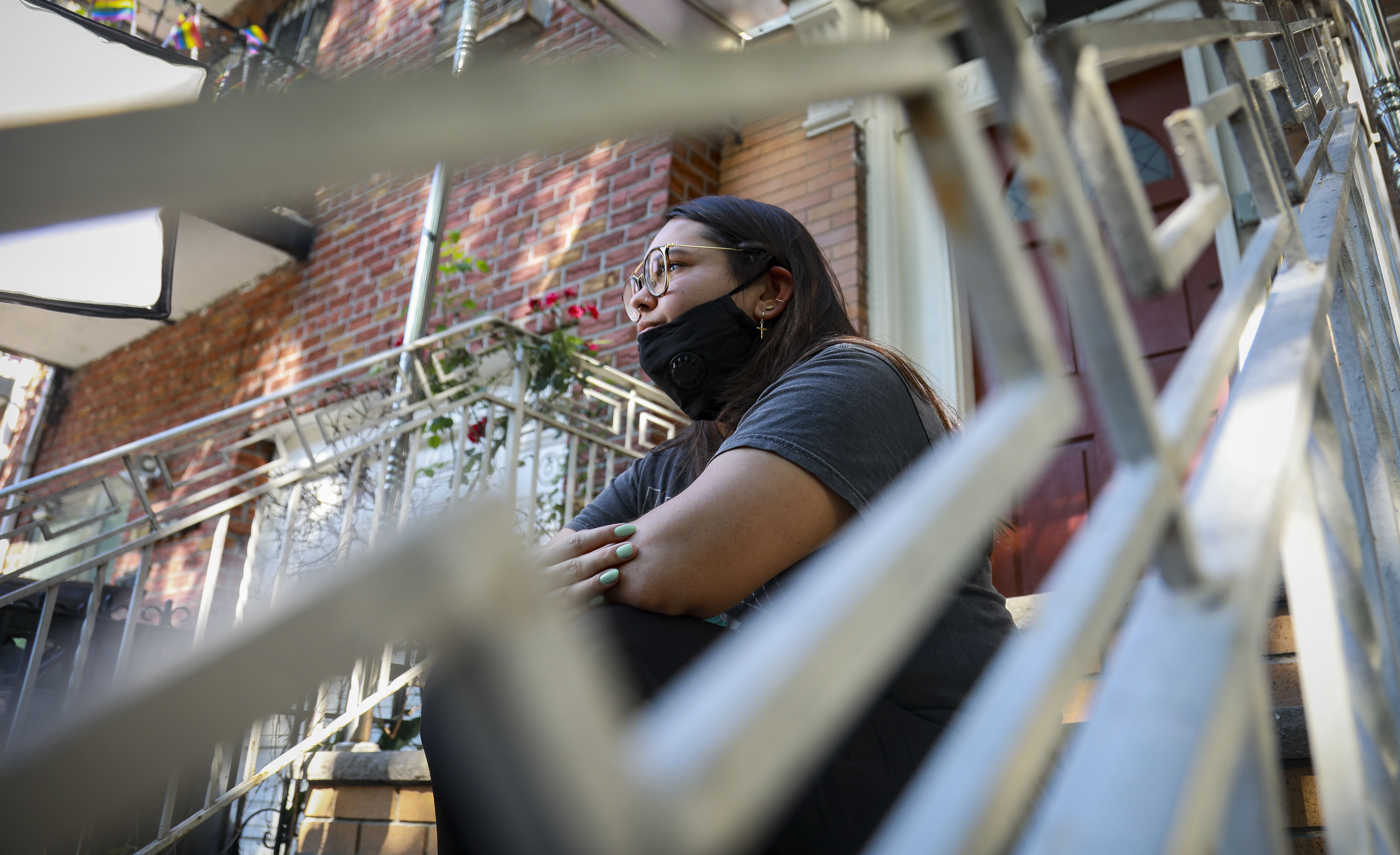