After weeks of warnings from health officials, President Donald Trump on Thursday abruptly decided to play public health hero and cancel the Republican National Convention in Jacksonville, Florida, announcing plans instead for “some things with telerallies”—just a few days after his private company quietly sought to trademark the idea.

Trump made the announcement just a few minutes in to the White House’s daily coronavirus briefing, declaring that “it’s not the right time” in light of the massive coronavirus outbreak in the state.

Trump said the RNC’s delegates would still meet in Charlotte, North Carolina, and that he would still hold a convention speech, albeit “in a different form.”

“We’re going to do other things, like ‘tele-rallies’ and other, smaller events,” he said.

While Trump attributed his decision to a desire to “protect the American people” and “set an example” amid the pandemic—which has now killed 144,000 Americans—many were quick to note that the pivot to telerallies came about a week after The Washington Post reported that a subsidiary of the Trump Organization filed an application to trademark the term “telerally” for “organizing events in the field of politics and political campaigning.”

The abrupt reversal also came after months of insistence from the president that a spiraling pandemic would somehow not prevent a mass gathering devoted to his re-coronation. It was also a likely source of relief to Florida officials, rank-and-file Republicans, and public health experts everywhere wondering how it could possibly go off.

The status of the RNC’s planned event in Jacksonville was increasingly in doubt in recent days, as the surging coronavirus crisis in Florida broke records on a near-daily basis—and as local officials expressed concern that the Republican National Committee had not sufficiently explained how the event would be conducted safely.

“Until I feel the health, safety and welfare are solidly protected, I can’t support this bill or any bill that could potentially implode with the virus and our safety and the welfare of our community and those that are coming here,” said Jacksonville City Council President Tommy Hazouri earlier this week, noting that a majority of city residents had opposed holding the event. Hazouri was referring to legislation on local funding to facilitate the event.

As the virus continued to rip through Florida, businesses were cautiously anticipating more news about whether they would be accepted by the top GOP committee to work for the confab. Several Jacksonville-based businesses who spoke with The Daily Beast said they were excited about the prospect of some additional cash flow, more so than feeling thrilled about appearing at a major function for Trump. Some local vendors said it would help boost their bottom lines, and that remaining vigilant with safety precautions was top of mind.

The decision to host the RNC in Florida was sporadic, and even headache-inducing, for some Republicans involved in planning. Just as the president was considering a variety of options for host locations, Ed Rollins, who now chairs the GOP group Great America PAC, told The Daily Beast in early June that, “logistically it’s a nightmare.”

Rollins also told The Beast that Trump should attempt to make the event as small-scale as possible, given the ongoing public health concerns that coronavirus presents.

Earlier in July, The Daily Beast reported that local officials in Jacksonville became scared that the Florida episode might turn into something that resembled his rally in Tulsa the previous month.

For his part, Trump on Thursday denied that Florida officials had pushed back against the event going forward, citing only “safety” as the reason.

“We have time, you know, we’re talking about the end of August,” he said, allowing that while the event would be nothing like RNCs in the past, he was confident it would be successful.

The president, contradicting his past insistence that responsibility for the government response to the pandemic often lay with state and local officials rather than himself, said he felt that it was incumbent on the Republican National Committee to emulate the behavior that he had lately begun to encourage everyday Americans to practice. In recent days, Trump has given some rhetorical ground on wearing masks in particular—a practice he long dismissed, and even attacked his Democratic rival Joe Biden for doing.

“We have to be vigilant,” he said. “We have to be careful. We also have to set an example. I think setting the example is very important—it’s hard for us to say we’re going to have a lot of people packed in a room, and then other people shouldn’t do it.”

Earlier this week, The Daily Beast obtained a copy of the current plans for the Democratic National Convention that showed a wildly scaled-back convention, with attendees sitting at socially distant tables, and with a program that will largely be conducted remotely at sites around the country.

During a question-and-answer session with reporters, the president said that while he still believes that the virus will somehow disappear eventually, “we wanted it to go away without a lot of death.”

“We didn’t want to take any chances,” Trump said.

Still, he could not help but attempt to put a positive spin on the American outbreak, which has risen to more than 4 million cases. “The country is in very good shape, other than if you look south and west. Some problems. It’ll all work out,” Trump said, referring to the slew of states where case counts and hospitalization rates have skyrocketed.

As for the Republican convention, now in its third iteration, it will be “really good,” the president promised. “I think we’re gonna do it well.”

Hot sleeper? We found a secret way to save $350 on a top-rated cooling mattress

Fri Jul 24 , 2020
Yahoo Life is committed to finding you the best products at the best prices. We may receive a share from purchases made via links on this page. Pricing and availability are subject to change. If you sleep hot, a cooling mattress is exactly what you need. Waking up in the […] 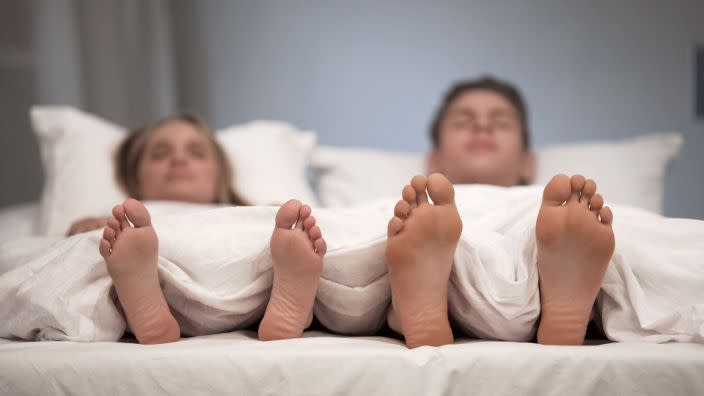