The Trump administration is resisting calls to make it easy for tens of millions of students to get free meals at school this year, even as childhood hunger rates have risen to the highest levels in decades.

During the spring and summer, as the coronavirus health crisis exploded, the government allowed most families to pick up free meals from whichever school was closest or most convenient without proving they were low-income. But that effort is on the verge of expiring as states prepare for children to return to school, and as school systems are pushing the federal government to continue the free meals program through the fall.

So far, President Donald Trump’s Agriculture Department isn’t on board with an extension. School leaders are now asking Congress to force the government’s hand as lawmakers buckle down to work on the next coronavirus aid package.

“It’s impossible. It’s insane,” said Katie Wilson, executive director of the Urban School Food Alliance, which represents the largest school districts in the country, including those in New York, Chicago and Dallas. “Our districts have been screaming about it. They’re panicked.”

Schools already face enormous logistical challenges as they decide whether to have students learn online, in classrooms or in some combination of both this fall. Expanding free meal access would also cut down the pile of paperwork needed to enroll the millions of children expected to become newly eligible for government-subsidized or free meal programs.

If USDA doesn’t extend the flexibility through the fall, families may be able to get food for their children only from the school where they are enrolled, after being deemed eligible for help — a change that would create logistical barriers for many families, particularly those without cars or with parents working multiple jobs.

Agriculture Secretary Sonny Perdue said his department is “maximizing our services and flexibilities to ensure children and others who need food can get it during this Coronavirus epidemic,” in a statement to POLITICO.

A spokesperson for USDA said the department is working with lawmakers as they develop the next coronavirus relief package. “This is [uncharted] territory, but we remain committed to ensuring all children have food to eat throughout this pandemic,” the spokesperson said.

The department did not directly answer questions from POLITICO about whether it supports additional authority or funding for universal free meals in the aid package.

The impasse highlights a sharp contrast between complex federal programs intended to fill empty stomachs in the nation’s classrooms, and a need to work around strict regulations built into a system that isn’t designed to operate in schools upended by a pandemic.

Wilson noted that Los Angeles schools are starting online instruction in a matter of weeks and need answers from USDA as soon as possible so they can plan.

“We need to do something different. Get rid of the bureaucracy,” Wilson said. “For goodness sakes! We’ve never seen anything like this before.”

Federal school nutrition programs often have been a political target, with disparate interests disagreeing about everything from fruit and vegetable servings to how much salt can be in pizza. But free meals have found broad backing, at least during the pandemic.

“This is still an emergency and we need to treat it that way,” said Diane Pratt-Heavner, a spokesperson for the School Nutrition Association, a group representing more than 50,000 local leaders who run school meal programs across the country.

The group earlier this month asked USDA to allow schools to essentially keep the regulatory latitude they’ve been given. The department has not responded, nor given any assurance that schools can expect the same level of flexibility through the school year, so nutrition groups are now pressing lawmakers to include language and funding for free meals in the coronavirus aid package expected later this month. Legislation is in the works.

The School Nutrition Association has activated its vast network of local school officials to send nearly 20,000 emails to lawmakers asking them to pressure USDA to approve the remaining waivers for the rest of the school year. A spending bill on the House side includes language urging USDA to act. There’s also a letter circulating in the Senate pressing the issue.

“Free lunches and free breakfasts are absolutely the way to go,” said Matt VanSchenkhof, the food service director for a small, rural school district in Pretty Prairie, Kan., a town of less than 700 people.

VanSchenkhof is spending a lot of extra time figuring out how to safely serve meals this school year, when kids in his district will most likely come back to school full-time with an option for remote learning. His team is working on plans to potentially quarantine some nutrition staff at all times so that the program would not have to shut down if someone were to become exposed or infected. He’s also ordered extra cafeteria tables so he can further space kids out and offer outdoor seating during lunchtime.

Most school cafeteria programs already face much higher food, labor, transportation and packaging costs, as they have been essentially operating emergency meals programs at scale for months. Nutrition providers had to come up with creative ways to still feed their students with schools shut down. Most districts are now operating some form of meal pickups, and some are even dropping meals off at students’ homes on a regular basis.

Still, many students who are eligible for free or reduced-price meals did not get them this spring. The National School Lunch Program, for example, served 28 percent fewer meals in March of this year compared to March of 2019, according to preliminary data from USDA. More recent data is not yet available.

It’s unclear how many students who have been getting help under the waived eligibility rules might get cut off if traditional rules go back into effect. School nutrition operators, for their part, say they have little appetite to go back to a scenario where staff spends time figuring out which kids are eligible.

“We’re going to be going from a situation where we were just providing meals to all kids, no questions asked … to having to track by student name and status, so that you can charge families if they don’t qualify by submitting a free and reduced meal application,” said Rosie Krueger, Vermont’s director of child nutrition programs.

“Our schools are very, very concerned about how that’s going to work,” she said.

Krueger said she wants to see Congress and USDA work together to make free meals happen for all schools. “That’s obviously a big ask, but it would vastly simplify things, and it would ensure that kids didn’t fall through the cracks,” she said.

The groups pushing for free meals say they do not have an estimate for how much it would cost per year. In 2018, the National School Lunch Program, which serves a mix of free, subsidized and paid meals to nearly 30 million children, cost just under $14 billion. An estimated 51 million children are projected to enroll in public elementary and high schools this fall.

Expanded access to meals would only address part of schools’ concerns. Schools still have to distribute food, and logistical tangles can create obstacles for students who need to be fed — especially those enrolled in online-only classes this fall, or ones who live in large, urban areas and rely on public transportation to get to school.

Some high-poverty school districts already serve universal free meals under what’s called the Community Eligibility Provision, something that’s available to schools if a certain percentage of their students already qualify for help. About 30 percent of schoolchildren were in schools with universal free meals in the 2019 school year.

“I’m not asking for a blank check,” Shelley said. Some 84 percent of the 37,000 students in her district qualify for free or reduced price meals. “I’m asking for one year, as we are navigating these challenging waters. Let me help take one thing off our families’ plates.”

Shelly said she recalled meeting Perdue at a school nutrition conference years ago. His motto for USDA, “Do right and feed everyone,” stuck with her as an important message.

Tue Jul 21 , 2020
HONG KONG (AP) — It was one of the first protests in Hong Kong after a feared national security law came into effect. Among a dozen or so lunchtime demonstrators at a luxury mall in the Central business district, a man raised a poster that — viewed from afar — […] 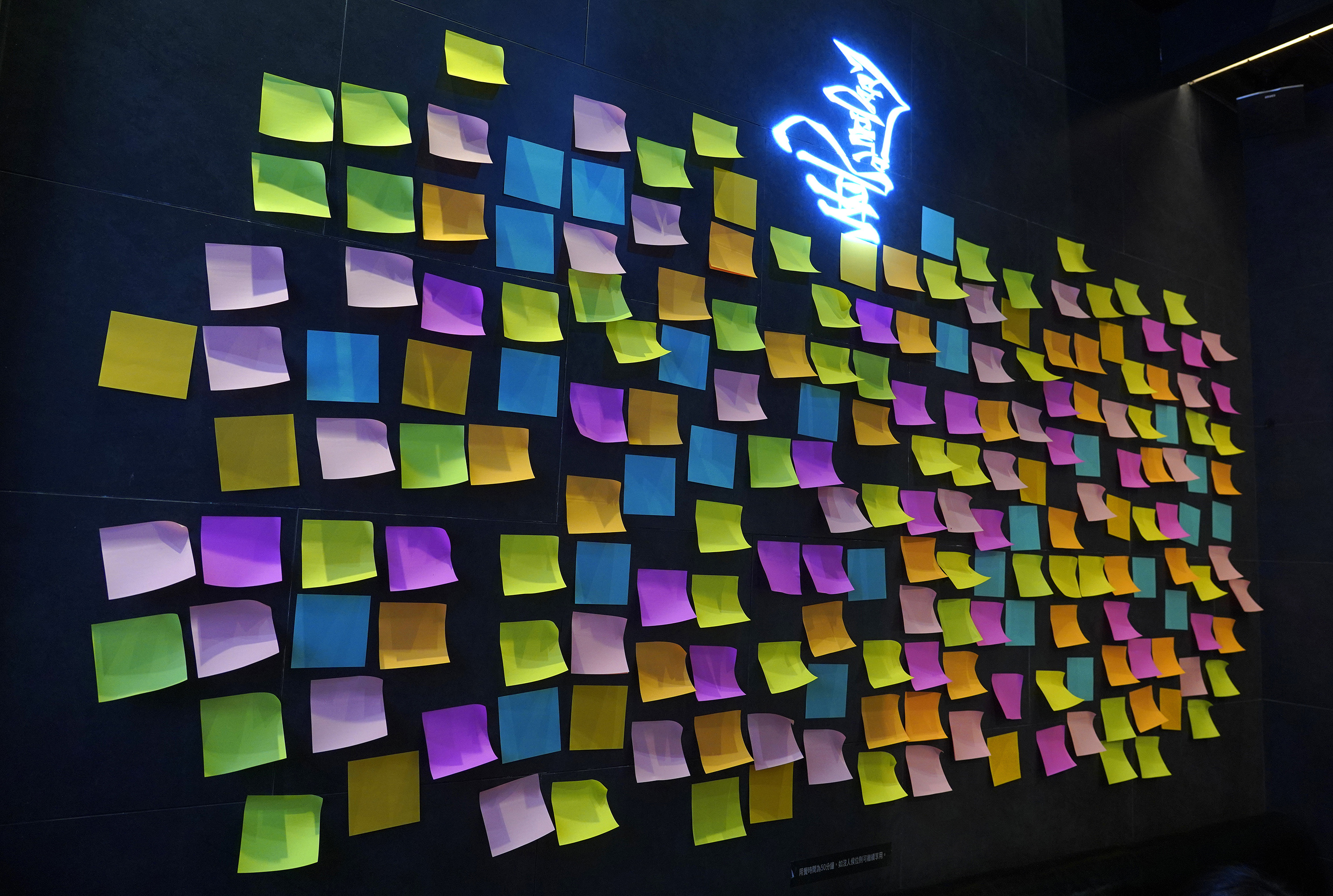