UPDATED, 12:41 PM PT: The CEOs of Google, Facebook, Apple and Amazon are testifying on Capitol Hill on Wednesday, in an unusual hearing that reflects the extent to which lawmakers have focused their scrutiny on tech platforms.

Hollywood’s lobby in D.C. is mainly watching from the sidelines, even as it has a vested interest in a number of issues, but this hearing’s focus is on antitrust as a House Judiciary subcommittee continues its investigation of competition among the major platforms.

While studios have been critical of Google in particular for not taking greater action to curb piracy, and lately have called for more “platform accountability,” taking a public stance on the issue of antitrust is a bit of a wild card that actually may end up backfiring.

Still, if the investigation leads to changes in antitrust laws, that will be of keen interest to traditional media players who have lamented the Google and Facebook dominance in digital advertising.

While Democrats on the House want the hearing to focus on antitrust, Republicans are likely to use the hearing to complain about what they see as bias against conservative voices.

A lot of the spotlight also is likely to be on Bezos, who is the world’s richest man and has never testified before Congress before. In his prepared remarks, he argued that Amazon “competes against large, established players like Target, Costco, Kroger, and, of course, Walmart — a company more than twice Amazon’s size,” he said.

The hearing will be chaired by Rep. Dave Cicilline (D-RI) who, in addition to being a frequent guest on cable news, also received a Screen Actors Guild card for playing himself on the TV series Providence.

12:21 PM ET: “Put your mask on!”: One of the more contentious moments of the day came as Rep. Jim Jordan (R-OH) made a show of trying to get Google’s Pichai to commit to not tailor its features to help Joe Biden and not try to use its search engine to silence conservatives.

Pichai tried to counter the premise of Jordan’s questions, before saying, “You have my commitment. It has always been true and we will continue to conduct ourselves in a neutral way.”

Then Rep. Mary Gay Scanlon (D-PA) took the floor and, in a jab at Jordan, said, “I would like to redirect your attention to antitrust law rather than fringe conspiracy theories.”

But Jordan then interjected, “Mr. chairman, we have the email, there is no fringe…”

Then Cicilline angrily banged the gavel and said, “You do not have the time. Please be respectful of the time. She controls the time.” Then Rep. Jamie Raskin (D-MD) yelled, “Put your mask on!” Jordan responded by saying, “Why would the deputy secretary of the treasury unmask Michael Flynn’s name.”

The hearing is supposed to be about antitrust, but at points it seems as if it has been anything but.

11:49 AM PT: Zuckerberg grilled on rationale for buying Instagram: The hearing has touched on issues of platform bias, misinformation and Russian election interference, so it may be easy to forget that the event is part of a House Judiciary antitrust investigation.

There was one noteworthy moment, though, when House Judiciary Committee Chairman Jerry Nadler queried Zuckerberg on Facebook’s intent when it bought Instagram, an acquisition that got the government’s green light but has been an ongoing source of concern that it only gave the social media site even greater market power.

Nadler cited documents from 2011 in which he described Instagram as a “threat” and that “Instagram can meaningfully hurt us without becoming a huge business.”

“In the space of mobile photos and camera apps, which was growing, they were a competitor,” Zuckerberg said.

Then Nadler asked him about another comment that Zuckerberg made back then, that the purpose of the deal was to “neutralize” a competitor.

“Congressman, whose aren’t my words, but yes, I have been clear that Instagram was a competitor, in the space of mobile sharing,” he said, while defending the purchase as “wildly successful” given Instagram’s growth.

But Nadler insisted that Zuckerberg had said that he wanted to “neutralize” a competitor. “If this wasn’t an illegal merger at the time of the transaction, why shouldn’t Instagram be broken off into a separate company?”

Zuckerberg said that the FTC still approved the merger.

“With hindsight it probably looks obvious that Instagram would have reached the scale it has today, but at the time it was far from obvious,” he said, again citing the growth of the platform since it was acquired by Facebook.

But Nadler said that based on the documents obtained by the committee and “by Mr. Zuckerberg’s own admission, Facebook saw Instagram as a threat that could potentially siphon business away from it.

“So rather than compete with it Facebook bought it,” he said. “This is exactly the kind of antitrust acquisition that the antitrust laws were designed to prevent. This should not have happened in the first place. It cannot be permitted to happen and it cannot happen again.”

Documents from the Hearing on “Online Platforms and Market Power: Examining the Dominance of Amazon, Apple, Facebook and Google” pic.twitter.com/AyACf4HFhN

Documents from the Hearing on “Online Platforms and Market Power: Examining the Dominance of Amazon, Apple, Facebook and Google” pic.twitter.com/b14sEfZkBJ

10:36 AM PT: Republicans try to steer hearing to tech bias: Not much of a surprise that Republicans are trying to steer the topic of the hearing to claims that major platforms are biased against conservative voices.

“Ill just cut to the chase: Big tech is out to get conservatives,” Rep. Jim Jordan (R-OH), the top Republican on the Judiciary Committee, said before outlining a litany of instances where he said that platforms have stifled voices on the right.

But in previous hearings, executives from Google and Facebook have pushed back on the idea that their platforms are systemically biased in the way that they carry out their policies, even though Republicans have seized on individual examples. By one measurement, of the top performing links, conservative voices rank in the top ten.

One of Jordan’s recent examples was an instance in June, when Amazon-owned Twitch temporarily suspended a Donald Trump campaign account. At issue were clips of Trump that Twitch concluded was “hateful conduct.”

Jordan complained that Democrats on the committee rejected their request that the hearing also include the CEO of Twitter. When the platform began putting fact-check links on some of Trump’s tweets, the president issued an executive order aimed at limiting the scope of social media platforms’ liability protection for third-party content. Twitter was not invited, as it is much smaller than the other platforms.

In a contentious moment, Democrats blocked Jordan’s effort to let Rep. Mike Johnson (R-LA), participate in the hearing, even though he is not a member of the subcommittee.

Later, Rep. James Sensenbrenner (R-WI), the top Republican on the antitrust subcommittee, took issue with the decision by Facebook, Google’s YouTube and Twitter to remove a video this week in which a group of doctors claim that hydroxycholoroquine can be a “cure” for the coronavirus and that masks are not needed.

But Sensenbrenner asked Zuckerberg about a step that Twitter took, which was to temporarily suspend the account of Donald Trump Jr. for posting the video clips.

Sensenbrenner said that he personally would not take hydroxychloroquine, but said that it was a “legitimate matter of discussion” as to whether it is an effective coronavirus treatment.

“What you may be referring to happened on Twitter, so it is hard for me to speak to that,” Zuckerberg said. But he said that Facebook prohibits content when “there is a legitimate risk of harm,” and “stating that there is a proven cure for COVID when there is in fact none, might encourage somebody to take something that could have some adverse effects.”

CEOs open with patriotic stories: Opening statements posted before the hearing began laid out preemptive storylines the four top execs hoped against hope might defuse some rancor from both sides of the aisle — from hard-knock childhoods to tiny companies that grew big American-style through innovation and grit. Patriotism was theme.

Bezos focused on humble roots with his mother a high school student in Albuquerque, New Mexico and his father a Cuban immigrant who arrived in the States alone at 16.

He said time spend on his grandfather’s Texas ranch taught him self-reliance. “When you’re in the middle of nowhere, you don’t pick up a phone and call somebody when something breaks. You fix it yourself,” said. As a teenager he became a garage inventor and “the concept for Amazon came to me in 1994. The idea of building an online bookstore with millions of titles.” He said initial seed capital for Amazon.com came primarily from his parents, “who invested a large fraction of their life savings in something they didn’t understand.”

“I told them that I thought there was a 70% chance they would lose their investment, and they did it anyway. It took more than 50 meetings for me to raise $1 million from investors, and over the course of all those meetings, the most common question was, “What’s the Internet?” Unlike many other countries around the world, this great nation we live in supports and does not stigmatize entrepreneurial risk-taking. I walked away from a steady job into a Seattle garage to found my startup, fully understanding that it might not work. It feels like just yesterday I was driving the packages to the post office myself, dreaming that one day we might be able to afford a forklift. Amazon’s success was anything but preordained.”

Lawmakers only just called on Bezos for the first time after nearly two hours of questioning mostly directed at Facebook ad Google.

Pichai said that “expanding access to opportunity through technology is deeply personal to me. I didn’t have much access to a computer growing up in India.”

Zuckerberg’s opening statement played up “significant competition” his company faces. “We compete against the companies appearing at this hearing, plus many others that sell advertising and connect people. We also compete globally, including against companies that have access to markets that we aren’t in. Our story would not have been possible without U.S. laws that encourage competition and innovation.”

“I understand that people have concerns about the size and perceived power that tech companies have. Ultimately, I believe companies shouldn’t be making so many judgments about important issues like harmful content, privacy, and election integrity on their own. That’s why I’ve called for a more active role for governments and regulators and updated rules for the internet. If we do this right, we can preserve what’s best about this technology — the freedom for people to connect and express themselves and for entrepreneurs to build new things — while also protecting society from broader harms.”

Cook called it “a uniquely American company” and defended the app store, which is under fire in the U.S. and Europe for squeezing developers with commissions. “After beginning with 50 apps, today the App Store hosts almost 1.7 million – only 60 of which are Apple software. Clearly if Apple is a gatekeeper, what we have done is open the gate wider.”

Another Driver of Tech ETF Rally

Wed Jul 29 , 2020
We are currently in one of the busiest shopping seasons of the year – Back to School. Every year, retailers are benefited from the start of the school year, but this year the shopping trend is likely to be a little different thanks to the coronavirus pandemic. As per the […] 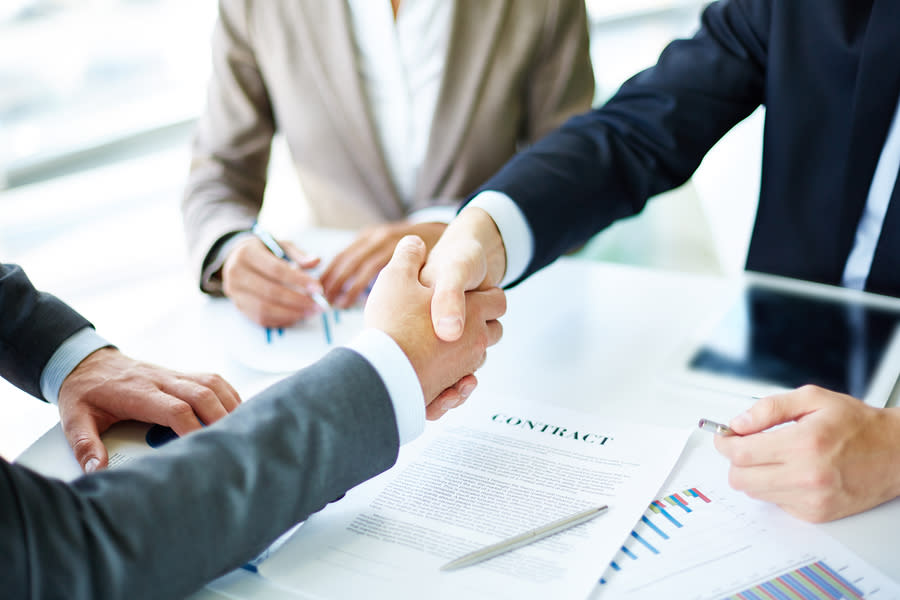