News yesterday that Telluride was canning its 2020 edition in the face of ongoing coronavirus challenges has left a hole in a film festival calendar already decimated by cancellations and postponements. The ‘fall festival trifecta’, as it is regularly referred to (Venice-Telluride-Toronto), has become a perfecta, and the events that do go ahead will be slimmed down this year to make them more manageable and safe.

These peculiar set of circumstances are putting added spotlight on the Euro fests that take place in later summer or early fall. Sarajevo insists it is happening in August (14-21), despite the recent cancellation of events in neighboring countries, and that is followed by Venice (September 2-12). Next up in the calendar is Spain’s San Sebastian Film Festival (September 18-26). The event, set up in 1953, has long brought together films from Cannes, Venice and Toronto, alongside a number of world premieres, and typically a handful of American films (in the past it hosted the Euro premieres of Hitchcock’s Vertigo and Star Wars).

The glamorous town is also noted for its ability to attract high profile talent – the natural beauty of the Basque region and the area’s remarkable density of Michelin-starred restaurants helps with that. Chris Hemsworth and his wife Elsa Pataky are noted regular attendees at the fest, and the honorary Donostia Award has brought names such as Meryl Streep, Denzel Washington, Max von Sydow, Sigourney Weaver, Danny DeVito, Judi Dench, and Donald Sutherland to San Seb in recent years (Viggo Mortensen, who regularly resides in Spain, is the recipient this year).

However, the pandemic has created significant challenges that organizers will need to overcome. Recently, in a sign of confidence that it will go ahead, the event unveiled its first titles, including five movies that arrive from the virtual Cannes Label, and detailed some of the virus preventative measures that it will employ this year to keep attendees safe. The contrast between the current situation in the U.S. and Spain is evident, while the former reports around 65,000 new cases per day, the latter has flattened the curve and is registering around 600. In San Sebastian, bars and restaurants have re-opened as life eases back to some semblance of normality.

There’s no doubt that this year’s festival will look very different. Deadline caught up with the fest’s director José Luis Rebordinos for his first interview outside of Spain this year to find out how preparations are going – he says they are “convinced” it will take place – what level of international attendance they are hoping for, and potential controversy around two of the selected directors, including Woody Allen, whose Rifkin’s Festival opens the festival having shot in the city last year.

DEADLINE: Hi José Luis, it’s looking hopeful that you will be able to hold your festival this year despite all of the disruption – were you concerned at points that you might need to cancel or postpone?

José Luis Rebordinos: Of course we’re concerned. What characterizes the situation this year is, above all, the insecurity and lack of certainty. We are convinced that the festival will take place, with restrictions in the capacity of our venues and strong security measures. We hope not to have to cancel or postpone anything.

DEADLINE: How much have your preparations been affected?

José Luis Rebordinos: Certainly our organization has been affected. It is a very complicated year. Bear in mind that many productions have been stopped and films that we thought we would be able to consider for the selection have not been finished. Besides, there are films already completed that, due to the current situation with movie theaters, will be released from next spring on and will wait for the 2021 festivals. On the other side, since the Cannes festival has not taken place, there are films that would have been programmed there and that will be released worldwide in San Sebastian.

DEADLINE: We recently wrote about how you are having a smaller number of screenings, reducing seating capacity in theaters, and putting most of the industry program online – are you able to use all your normal venues?

José Luis Rebordinos: We will virtually use all the usual venues except for the Anoeta Velodrome, where we held screenings for 2,500 people, and the San Telmo Museum, a key space for the European-Latin American Co-Production Forum and other industry activities.

José Luis Rebordinos: As of today I have a feeling that if there is no major setback in the health situation, we are going to have many industry delegates and many filmmakers attending our festival. We already have confirmations of attendance from people coming from the U.S., Asia and many from Europe.

DEADLINE: Your first crop of titles includes several Cannes Label films – can you tell us a bit about your collaboration with the French festival during this extraordinary time?

José Luis Rebordinos: Our relationship with the Cannes Film Festival has been very good for a long time. Thierry Frémaux, its director and also director of the Lumière Festival in Lyon, presents a restored classic film every year in San Sebastian. He also visits the Elías Querejeta Film School, which we are part of, and shares a few hours with its students. This year, given the non-celebration of Cannes Film Festival, we decided to offer some of their films the possibility of having their premiere in our festival. We talked about it with Thierry and he was fine with it. Please note that the FIAPF rules allow us to do so. I hope that Thierry will join us in San Sebastian and we’ll do something together. Hopefully we will find further formulas of collaboration between Cannes and San Sebastian. With the Producers Network of the Marché du Film of Cannes and with Ventana Sur, the market held in Buenos Aires in December, we have an agreement both for our European-Latin American Co-Production Forum and for Proyecta, which takes place during Ventana Sur.

DEADLINE: One of your announced titles, Any Crybabies Around?, is a world premiere, alongside your opening film Rifkin’s Festival – how many world premieres are you expecting in total? Will the overall program be slimmer, like Venice and Toronto, this year?

José Luis Rebordinos: I estimate that about half of the films participating in the Official Selection will be world premieres, but this is an issue that does not bother me. We explore the rules as much as possible in order to screen films that have already participated in other festivals. That’s why we have sections like Perlak or Zabaltegi-Tabakalera, but for years now, as the regulations allow us to, we screen films that have already been released in Telluride or Toronto in our Official Section as a European premiere. The lineup will be significantly reduced compared to previous years. We estimate that films will be reduced by 30%.

DEADLINE: Are you hoping to show any U.S. films?

José Luis Rebordinos: At this moment we have a confirmed film from the U.S. in the Official Section, as a special screening. I don’t know how many more there will be, but I’m sure they’ll not be many.

DEADLINE: Has the moving of the Oscars in 2021 affected the films available to you this year?

José Luis Rebordinos: It has affected us, of course. Some of the titles that we would have liked to show in premiere, or in our Perlak section after their screenings in Venice, have been postponed to 2021.

DEADLINE: Regarding Rifkin’s Festival, it’s fair to say Woody Allen is less of a controversial figure in Europe than he is in the U.S. – but still, did you have any concerns about selecting the title?

José Luis Rebordinos: As for Woody Allen, I have no worries about selecting his film. I judge films, I’m not a policeman or a judge, and I won’t ever intend to practice either profession. Woody Allen is a great filmmaker and it’s an honor for us to show to the media, the industry and our audiences his latest film in world premiere at our festival.

DEADLINE: Sharunas Bartas, the director of one of your other films [In The Dusk], has also been accused of misconduct in the past, though he has not faced legal charges and his film also took part in Cannes. Did you consider this in your programming decision?

José Luis Rebordinos: I know the subject. I insist, I only judge films and I think that it is terrible to call a person into question without any legal accusation. I believe that justice is there to intervene wherever there is a violation of the law. Festivals are here to select films according to their quality.

DEADLINE: Can you tell us a bit about how the situation feels in Spain right now? Restaurants and bars are so key to the San Sebastian vibe – are they returning to normal?

José Luis Rebordinos: The restaurants and bars are getting back to normal. Now there are some new outbreaks and some setbacks, but I assure you that you can perfectly enjoy our gastronomy right now and I am convinced, although nothing can be confirmed right now, that in September the situation will be better.

DEADLINE: Do you have worries about possible spikes in infections? Are you putting any contingency plans in place in case this does happen?

José Luis Rebordinos: Of course we are worried about possible further setbacks because it is out of our control. At the moment we are working with a team of architects specializing in COVID-19 to design a project that will include all the spaces we are going to use with their capacity plans, entrance and exit flows, etc. We will submit this project to the Basque government so that their health authorities can give us green light. It will be the master plan that will define how the next edition of the festival will be.

Google is investing $4.5 billion in India's mobile internet giant Reliance Jio and the 2 will make a new affordable Android phone

Wed Jul 15 , 2020
Google CEO Sundar Pichai with his wife and engineer Anjali Pichai as they arrive to attend the wedding ceremony of Akash Ambani, son of Indian businessman Mukesh Ambani, in Mumbai on March 9, 2019. SUJIT JAISWAL/AFP via Getty Images Google is to invest $4.5 billion into Indian internet company Jio […] 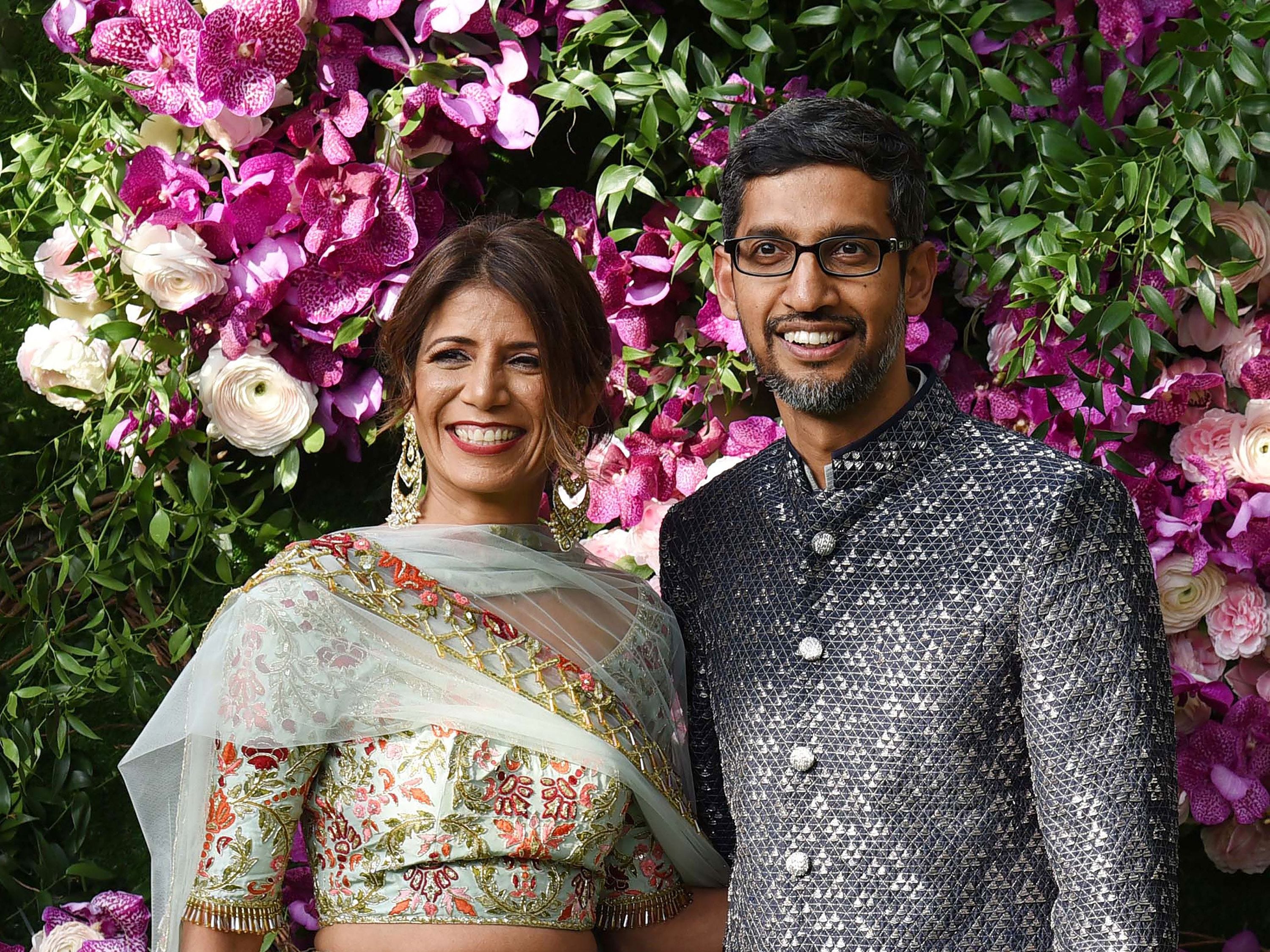