Big Tobacco has done it. So have Big Pharma and the Big Automakers. Now it’s Big Tech’s turn.

On Wednesday, the tech sector becomes the latest industry to sit in the glaring spotlight of a high-profile congressional hearing when the CEOs of four of the biggest companies — Amazon, Apple, Facebook and Google — testify together in a live, televised hearing.

The executives are set to face hours of questions from members of the House Judiciary Subcommittee on Antitrust, Commercial and Administrative Law about whether they hold monopoly-like grips on the digital economy and whether their companies should be broken up or in some way contained.

People concerned about the power of the tech industry said they believe the hearing could be a historic moment to draw new attention to old ideas about trustbusting.

“It’s the beginning of a revived moment in antitrust,” said Zephyr Teachout, a Fordham University law professor and author of “Break ‘Em Up,” a forthcoming book about monopolization.

Teachout, one of the most visible critics of Big Tech’s power, said that it’s been decades since Congress has paid this much attention to the concentration of economic and political power in the hands of a few businesses. She said the hearing comes at a time when the public is thirsting for some action.

“We’re at a different moment, where people are ready to shake up the basics of who has power,” she said.

In under three decades, Amazon, Facebook and Google have grown rapidly from rambunctious startups to world-striding behemoths. Along with Apple, an older company that once faced bankruptcy but has since become one of the most profitable companies in the world, the companies consistently rank among the most valuable corporations.

Their central roles in e-commerce, online advertising, digital information and other trunks of the internet have put them on the defensive in a wide array of investigations by U.S. and European antitrust enforcers and state attorneys general.

But the companies have generally been adamant that they’re not violating antitrust laws. Facebook CEO Mark Zuckerberg plans to testify that his company has plenty of competitors in the markets in which it operates, with startups such as TikTok always threatening its position, according to a person familiar with Facebook’s thinking who wasn’t authorized to speak publicly.

The stakes for Wednesday’s hearing are high not only for the tech industry, which faces calls for a dramatic reshaping of how it does business, but also for American business generally. Rep. David Cicilline, D-R.I., chairman of the antitrust subcommittee, plans to release a report in the coming months that could form the basis of new antitrust legislation.

“Any time this much power is in the hands of a small group of people, it can destabilize the economy and society as a general matter,” a senior Democratic committee aide said in a briefing with reporters.

Committee aides said the purpose of the hearing is to get evidence from opaque companies about anti-competitive concerns. Cicilline’s staff has spent more than a year digging into the details of the online economy, compiling 1.3 million documents. About 15 lawmakers will have the chance to question the four CEOs starting at 12 p.m. ET.

Americans’ perception of the tech world is also in the balance — 72 percent of U.S. adults say social media companies have too much power and influence in politics, according to a Pew Research Center survey released last week.

Zuckerberg has become a veteran of congressional appearances since lawmakers began looking at Facebook’s role in the 2016 presidential election. But the other CEOs are less experienced. Amazon’s Jeff Bezos hasn’t testified before Congress before. Apple’s Tim Cook has testified once, in a tax hearing in 2013; and Sundar Pichai, CEO of Google and its parent company Alphabet, testified in 2018.

Putting an entire industry on defense at once gives lawmakers a chance to try to extract commitments, said David Balto, former policy director for the Federal Trade Commission.

“What you really want in a hearing like this is you get all the executives together in a single line and you go one by one and you say, ‘Will you commit to stop doing the following?’ And then you go down the line and you get each person to make a commitment,” Balto said.

The most dramatic such scene occurred in 1994, when the nation’s tobacco chiefs collectively testified that they didn’t believe cigarettes were addictive. They later revised their view.

But hearings aren’t always so effective or revealing. Last year, when pharmaceutical CEOs appeared together at a Senate hearing, they declined to commit to lowering drug prices.

The tech industry is also different from other types of businesses. For one thing, most of its products are free or no-cost, which is an important factor in evaluating a company’s conduct under U.S. antitrust law.

And tech companies have managed to make friends and enemies in both political parties, partly through their role regulating political speech on social media.

Republicans have proposed adding one more executive, Twitter CEO Jack Dorsey, to Wednesday’s witness list, although Twitter as a business is much smaller than the others.

One wild card is that the CEOs will appear virtually, not in person, because of the coronavirus pandemic. That means there won’t be an iconic photo of the four men standing shoulder to shoulder.

Testifying remotely from a home or an office may take some pressure off the witnesses, but it may also affect the rhythm of questioning in unexpected ways, experts said.

Sarah Miller, executive director of the American Economic Liberties Project, an advocacy group that favors breaking up big companies, said the executives might have an easier time avoiding follow-up questions than if they were in person. But she said that if they do, lawmakers should respond with subpoenas to get the answers they need.

“Having to sit there in that room — looking at this panel of lawmakers and answering their questions face to face — is an important moment and spectacle, but at the end of the day it’s about the substance,” Miller said.

She said she expects the hearing to kick off broader discussions about the power of large, private corporations, not just in the economy, but in the political system, too.

“The tech corporations are the tip of the spear, I would say,” she said. “We need overall to decentralize economic power in our society, and that is a critical and urgent project.”

Tue Jul 28 , 2020
If you’ve ever had your hair lightened or coloured, you’ll know the flip side of your gorgeous crowning glory is the dry hay-like heap your hair can become due to the harsh products used in its transformation. Bleach and colour can brutally strip your hair, damaging the shaft and cells, […] 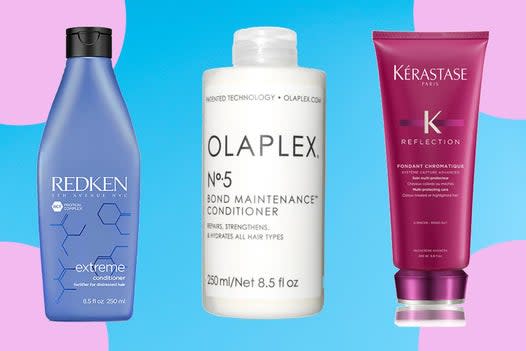