Camille Schmidt was recently asked at a meeting to share something about her that no one at the company knew. As opposed to the previous meeting, when she needed to announce a hidden talent her co-workers weren’t aware of.

If it sounds like getting-to-know-you day at school, it should. The intent among leaders at Philo, a TV streaming company, is to humanize the dry video meeting and make them come to life.

Meetings “will never be the same as in person, but this way continues to make us a cohesive group,” says Schmidt, a communications manager for Philo. “It’s the social hours that really connect us as a company. We have 10 new hires that have come aboard since the pandemic. And I feel like I know them, even though I’ve never met any of them in person.”

Keeping the human connection going when you’re behind a video camera is a question most of us are all grappling with during these challenging times. Whether we like it or not, we’re all being asked to learn, meet or look for new jobs via webcam.

When Mark Comon had to cancel all his photo classes for his Los Angeles area camera store, Paul’s Photo, and shift them online, he had to figure out how to replicate an experience that allows for student/teacher interaction. Learning photography, of course, is about asking and answering questions and reading the room to gauge how things are being comprehended.

Tips: Yes to the camera, no to the sweats: The do’s and don’ts of video meetings

For Comon, whose Creative Photo Academy offshoot teaches most nights, one simple answer was to open the class a half-hour early. “The instructor is on, people know they can come in and hang out, which we encourage. We want this to be all about personal interaction, not just a dried, canned thing.”

And it’s worked out so well, he’s not sure he’ll go back to physical classes.

“A lot of people like the online class better,” he says. “People don’t have to drive here,” and they can interact with the photos displayed by the instructor better on a computer screen.

For Randy Lehrman, who runs the Los Angeles event company Real Genius, he also turned to gaming to keep afloat.

He offers DJ services for weddings, corporate parties, birthdays and bar and bat mitzvahs and has shifted to online parties for companies and organizations in the guise of trivia contests.

It won’t make up for the 2020 party cancellations, but “it’s fun, and it’s great being able to interact with people and hear them laugh again. They’re stuck at home, too.”

He uses breakout rooms to interact more closely with people. “I break the ice, talk to them about they’re doing, put up funny backgrounds because this is new norm and we’re all getting used to it. We’re just bringing the party to them in a different way.”

For Tyler Haak, an account executive for Schneider Electric, which sells fixtures to hotels, he’s used to traveling to meet with clients and he really misses the personal touch from analog meetings. “The handshake, walking side by side, the opportunity to finish the meeting and grab lunch afterwards.”

But with video and without travel, he can do way more meetings, “so I’m seeing more people.”

He just has to work harder at bringing the personal interactions into the video meeting, he says.

One way to do that is with the gamification of meetings, says Gamal Palmer, who runs the Diversity Gym consultancy. He starts every meeting with a prompt to participants to put things into chat or respond to a poll and asks them game-like questions like “What name would you change to that would describe the way you’re feeling today?” and they respond in kind.

“In-person we have body language and general mood or energy,” to read how a person is feeling, and that’s missing on video meetings, he says. So he finds that he needs to be “more explicit” in giving direction, several times, “to help people engage, and to honor the fact that people learn and absorb differently.”

Susan Kjorlien, who runs a San Francisco area-based college consulting business for high school kids, gave her up her office and moved her meetings online recently.

Video conferences are more efficient, and it’s easier to do show-and-tell on a video meeting, where she can share her screen instead of turning her laptop around in the office.

It also makes her a better advisor. “I make a conscious effort to be more upbeat and positive and connected because there’s a screen there,” she says. “That’s helped me become better connected.”

Finally, how to deal with looking great on camera? “It’s about understanding that we are going to be on camera all day and you need to dress professionally, make sure your hair is combed and makeup is good,” says Schmidt. “It’s just like getting ready for work.”

How to improve distance learning for our youngest students

Thu Aug 6 , 2020
Younger students struggle with distance learning for an obvious reason — they have shorter attention spans. (Halfpoint — stock.adobe.com) Many teachers, students and their families can agree on one thing after experiencing the unexpected hurricane that was distance learning this spring: It must improve — especially in the earliest grades, […] 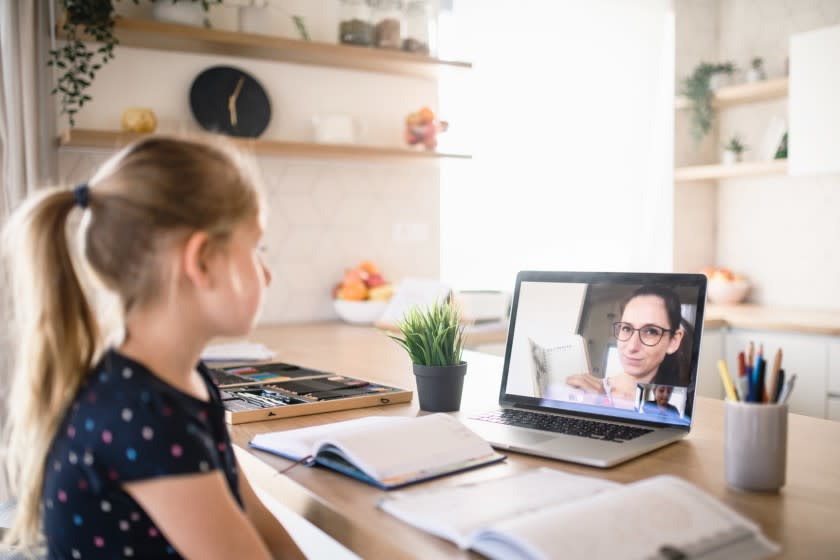