The day after his 29th birthday in May, Olalekan Jacob Ponle posted a picture on his Instagram standing next to a bright yellow Lamborghini in Dubai.

“Stop letting people make you feel guilty for the wealth you’ve acquired,” he admonished, wearing designer jewellery and Gucci from head to toe.

A month later, the Nigerian, who goes by the name “mrwoodbery” on Instagram, was arrested by Dubai Police for alleged money laundering and cyber fraud.

The most famous of the dozen Africans nabbed in the dramatic operation was 37-year-old Ramon Olorunwa Abbas, “hushpuppi” or just “hush” as he was known by his 2.4 million Instagram followers.

Police in the emirate say they recovered $40m (£32m) in cash, 13 luxury cars worth $6.8m, 21 computers, 47 smartphones and the addresses of nearly two million victims.

It’s a different type of GLOW and STANDARD when you start hopping out of Rolls Royces to catch a Jet just to attend fashion shows in a different continent. Your smile begin to be bright just as the sun. #SettingNewStandards #RollsRoyce #PrivateJet #LouisVuitton #Fendi #OffWhite #Nike #Gucci #Fashion #Dubai #Paris #VirgilAbloh #Dior #Sun #Nature

Mr Abbas and Mr Ponle were both extradited to the US and charged in a Chicago court with conspiracy to commit wire fraud and laundering hundreds of millions of dollars obtained from cybercrimes.

The two have not yet been asked to plead and are presumed innocent until proven guilty.

“I think there’s probably a certain arrogance when they believe they’ve been careful about maintaining anonymity in their online identities, but they live high on the hog and get careless on social media,” said Glen Donath, a former senior prosecutor in the US Attorney’s Office in Washington, DC.

It is a spectacular crash for the two Nigerian men who extensively documented their tacky, high-flying lifestyle on social media, raising questions about the sources of their wealth.

A smile on my face doesn't mean my life is perfect, it means I appreciate what I have and what God blessed me with.

They unwittingly provided crucial information about their identities and activities for American detectives with their Instagram and Snapchat posts.

They are accused of impersonating legitimate employees of various US companies in “business email compromise” (BEC) schemes and tricking the recipients into wiring millions of dollars into their own accounts.

On Instagram, hushpuppi said he was a real estate developer and had a category of videos called “Flexing” – social media lingo for showing off. But the “houses” were actually a codeword for bank accounts “used to receive proceeds of a fraudulent scheme”, investigators allege.

“Our value system in Nigeria needs to be checked, especially the emphasis we place on wealth, no matter how you got it,” the economist Ebuka Emebinah told the BBC from New York.

“It’s a culture where people believe that results speak for you. We don’t place as much emphasis on the process and this has built up over time.”

In April, hushpuppi renewed his lease for another year at the exclusive Palazzo Versace apartments in Dubai under his real name and phone number.

“Thank you, Lord, for the many blessings in my life. Continue to shame those waiting for me to be shamed,” he captioned an Instagram picture of a Rolls-Royce just a fortnight before he was arrested.

“Abbas finances this opulent lifestyle through crime, and he is one of the leaders of a transnational network that facilitates computer intrusions, fraudulent schemes (including BEC schemes), and money laundering, targeting victims around the world in schemes designed to steal hundreds of millions of dollars,” the Federal Bureau of Investigations (FBI) said in an affidavit.

What y’all think about my new bespoke black badge Rolls-Royce Wraith? Lol. This post is to everyone who has been made to feel low about themselves, to those who has been told will never amount to anything, to those who has been looked down upon, I want you to know today that as long as you don’t see yourself as low as they make you seem, as long as you have a valid dream and work hard, and most importantly if you believe in God, you can achieve anything and everything. This post is specially dedicated to all Hushpuppi fans worldwide, to those who don’t know me and has defended and supported me in anyway or the other, to my real friends JJ, Rawflesh, OvaWise, Debo Bentley, SK, Hp and S.p of Ghana and all those that I can’t mention, God bless you all. Make una repost and congratulate me o make my success loud pass my failures and shortcomings 🤣 #RollsRoyce #Bentley #Wraith #Bentayga #BlackBadge #Versace m

In one case, a foreign financial institution allegedly lost $14.7m in a cyber-heist where the money ended up in hushpuppi’s bank accounts in multiple countries.

The affidavit also alleged that he was involved in a scheme to steal $124m from an unnamed English Premier League team.

The complaint against Mr Abbas and Mr Ponle describe tactics that resemble what the company calls Vendor Email Compromise tactics where scammers compromise an email account and study communication between a customer and a vendor.

Mr Ponle, known online as “mrwoodberry”, used Mark Kain in emails, according to the FBI.

He is accused of defrauding a Chicago-based company into sending wire transfers of $15.2m. Companies in Iowa, Kansas, Michigan, New York, and California are also said to have fallen victim.

The cash trail allegedly disappeared after his accomplices, called money mules, converted the money into the cryptocurrency bitcoin.

Email scams have become so prevalent globally, and so deeply linked to Nigeria, that the fraudsters have a name in the country: “Yahoo boys”.

They try to convince a recipient to wire money to the other side of the world or they go “phishing”, stealing a user’s identity and personal information for fraud.

How a 419 and romance scam works

A Washington, DC-based attorney, Moe Adele, finds it frustrating as a Nigerian because it ignores the “systemic failures that have led to brilliant Nigerian youths engaging in these scams”, in the country and abroad.

“They see it as an easy way out in a country that offers them limited options and, in many cases, no options at all,” she says.

“But there are also many brilliant Nigerians are represented in world stages from education to pop culture.”

Last month, the US Treasury Department blacklisted six Nigerians among 79 individuals and organisations in its Most Wanted cybercriminals list. It accused them of stealing more than $6m from American citizens through deceptive global threats like BEC and romance fraud.

“A lot of Nigerians are doing fantastic things all over the world, but they don’t get as much media mileage as the guys doing bad things. It affects all the guys doing legitimate stuff especially in the tech space,” he said.

“A lot of foreign companies don’t ship to Nigeria, many payment platforms don’t accept payments from us because it has ruined our image.”

In its internet crime report for 2019, the FBI said it had received more than 460,000 complaints of suspected cyber fraud, with losses of more than $3.5bn reported. More than $300m was recovered, it said.

However, many online fraudsters don’t get caught and even fewer end up going to jail.

Mr Donath says the cases are challenging because they happen overseas and tend to be quite sophisticated.

“They’re time-consuming, highly document-intensive, and in many federal criminal cases, you have the difficulty of walking a jury through a chronology of relevant facts,” said the partner at law firm Clifford Chance.

If convicted, Mr Abbas and Mr Ponle could be locked up for up to 20 years.

Wed Jul 8 , 2020
The Trump administration announced international students will have to leave the USA, or face possible deportation, if the college or university they attend switches to online-only classes in the fall because of the coronavirus pandemic. Similarly, international students enrolled in colleges or universities offering only online courses this fall will be barred from […] 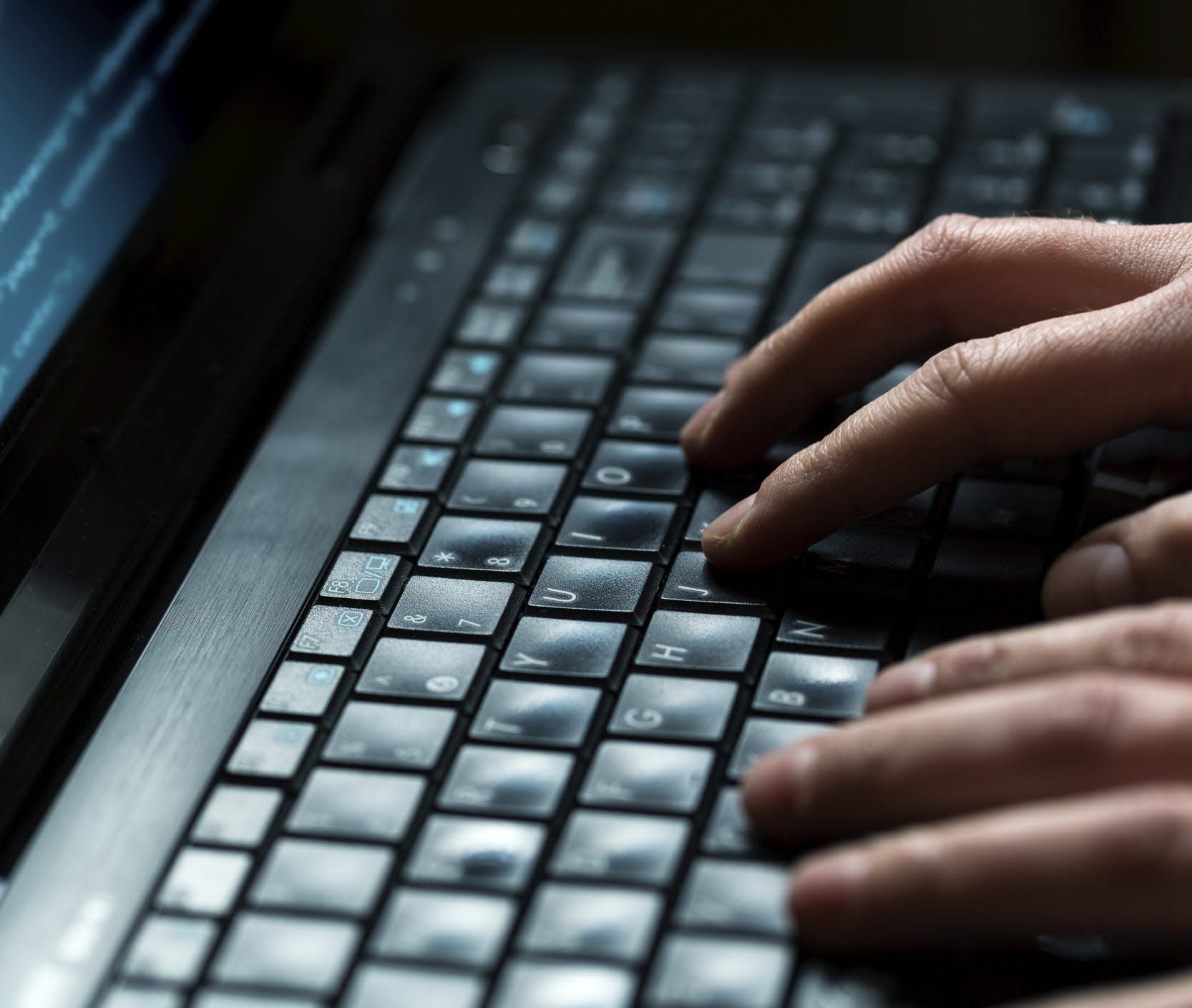