When Brock Pierce sat in President Bill Clinton’s Oval Office chair during a visit to the White House in 1996, the young actor — then starring in a comedy about playing the president’s son — didn’t realize what the moment would mean to him about a quarter century later.

“To this day, it just brings me incredible joy,” he says. “It’s not an everyday thing.”

Pierce, improbably, now says he wants it to be.

The former child star-turned-cryptocurrency entrepreneur announced his last-minute bid on July 4 — the same day as a much larger celebrity, Kanye West, also tossed his hat into the ring to challenge President Donald Trump and former Vice President Joe Biden in the 2020 race.

In a wide-ranging interview about what he has been up to since his mid-90s acting career, Pierce tells PEOPLE that going back to the White House has been on his mind for a long time.

“I’ve been thinking about it my whole life,” says Pierce, 39. “It’s always felt like a calling.”

That goal, he says, has traveled with him through a shifting post-acting career of business ventures, political encounters, lavish experiences around the world and a wild wedding at Burning Man.

But all of that started when Pierce — a 3-year-old hockey-loving boy from Minnesota — began taking on small roles in commercials and later landed a supporting role in The Mighty Ducks series, leading to a 13-year career in Hollywood.

Pierce was only a teenager and already near the end of his acting career when he visited the White House in 1996.

The young star had just appeared in the film First Kid, playing the president’s son alongside the comedian Sinbad. He was 14 then and thinking about leaving acting, determined to carve his own path as a Hollywood producer.

He stuck it out for another year, acting in a few more projects and soaking up the fame and access that being a movie star can bring. He enjoyed the fanfare, but Pierce says it brought on tough personal decisions as well.

In one instance, which he says he still toils over decades later, Pierce was on location in Egypt filming 1997’s Legend of the Lost Tomb when he says an adult on set told him he had permission to carve his name into a pyramid.

Constantly surrounded by a crew of adults and absent from what he calls a “normal childhood,” Pierce says there was trauma, growing pains and moral dilemmas involved with being a child star.

So he abandoned his plan to transition from acting to producing. Instead, he left the business completely and turned his attention on technology.

In 1998, after Pierce filmed his final three movies the year before, the now 16-year-old retiree began studying the cross-section between entertainment and the internet.

He co-founded the Digital Entertainment Network with two others and eventually raised $88 million in funding. The network was seen as a prelude to YouTube, but Pierce says now it failed because the technology wasn’t there yet and the internet bubble burst before that tech could catch up.

But his company, and Pierce, also faced legal trouble near its end: Three people sued one of Pierce’s co-founders, Marc Collins-Rector, alleging sexual and physical abuse, according to The Hollywood Reporter. Pierce was also named in the 2000 lawsuit claiming abuse.

The three plaintiffs eventually dropped their suits and Pierce payed one of them $21,600. Both he and Collins-Rector denied the allegations.

According to THR: “Many of the allegations regarding Pierce in this lawsuit were later recanted, and one of the plaintiffs was convicted of fraud. Two witnesses testified that two plaintiffs had offered them substantial sums to testify falsely in the suit against Pierce”

Speaking with PEOPLE, Pierce adamantly explains the payment was not “some sort of admission of guilt” and that it was to help cover the plaintiff’s legal fees.

“At the time, I didn’t think that [payment] was a huge deal,” he says. “In retrospect, I wouldn’t have done that because it’s been inaccurately stated as a settlement. In the world of lawsuits, $21,000 is not a settlement.”

Pierce continued to work in the digital space.

He was already familiar with Hollywood paychecks but he was about to hit a payday unlike any other when he entered the oft misunderstood but affluent world of digital currency.

The ex-actor first focused on in-game video game currencies with his company Internet Gaming Entertainment. There, Pierce crossed paths with Trump’s former White House adviser Steve Bannon, who he brought on as a venture capitalist. Pierce once called Bannon “my right-hand man for, like, seven years,” according to THR.

But despite being the company’s CEO, Pierce left to pursue other ventures.

He worked his way to chairman of the Bitcoin Foundation and also has roles as “a founder, advisor, or board member” of a laundry list of either impressive-sounding or impenetrable-seeming enterprises: BitGo, Blade Financial, Coin Congress, Noble Markets, Tether, ZenBox. (And so on.)

He says he’s made hundreds of millions for his companies and at least a billion for himself.

Rolling Stone dubbed Pierce “The Hippie King of Cryptocurrency” in a 2018 profile, the same year Forbes named him one of the wealthiest people in cryptocurrency and estimated his net worth then at between $700 million and $1 billion.

When Pierce talks casually about the money he’s made throughout his career — whether for himself or his cryptocurrency ventures — he speaks of it in the trillions.

The one-time child star has become a fierce advocate for digital currency, arguing that the online financial world — and blockchain logs it uses for a transparent backbone — is already becoming the focus of other countries’ economies around the world.

In his opinion, he warns, other nations have a leg up on the U.S.

Which brings us to his surprise presidential bid.

Even before his July 4 announcement, Pierce says he went to Washington, D.C., once already to try and explain to U.S. officials his belief that its lagging effort in embracing cryptocurrency has the country on the wrong path. (Pierce won’t get into details about that meeting other than he’d guess it happened in late 2018 or early 2019.)

“It’s, um, this is kind of a national security kind of centric sort of conversation,” he says, hesitant to explain further or offer any details.

Nonetheless, he says, his concern about the future of cryptocurrency is unwavering.

“It has the potential to change the global or economic system in which we live,” says Pierce, whose outlook on life, business, and personal relationships is as untraditional as the currency he’s pushing for governments to use.

The father of two young girls says he and his wife, entrepreneur Crystal Rose, renew their vows every year because he says the long-conventional practice of marriage has proven to fail.

He met Rose, the CEO of messaging company Sensay, at the famous Burning Man in Nevada and proposed to her there in 2015. The couple married at the same festival a year later, asking friends and family to join them in the Black Rock Desert.

“It seemed like the appropriate place,” Pierce says, though he had to convince his father and some hesitant friends and family members to attend the unique ceremony.

“When’s the real wedding?” his father asked, and Pierce replied: “That’s the only one.” (Kind of.)

Relationships can fail from a lack of routine communication, he says, comparing the concept to corporate human-relations: “You do an annual review with your employees to see what’s working and what’s not working and how you’re going to grow in your career element, but we often fail to take these same very effective concepts and implement them in our lives.”

Pierce and Rose had a second ceremony in Spain in 2017 and then a third in August of 2018, while on a flight over China. (“Usher, the singer, was our usher in the wedding,” Pierce saying, laughing, about that mid-air celebration.)

“We like to have fun with things,” he says. “I grew up as an artist, so there’s an artist in me that’s always wanting to express itself. We do things a little bit differently.”

Pierce says he has similar outside-the-box ideas for the White House, should he get enough votes to make it there.

Pierce is running as an independent, after filing with the Federal Elections Commission this month and making his way onto at least one state’s ballot. He paid a $35,000 fee to make it onto Oklahoma’s ballot, just like West.

The entrepreneur has earned a handful of endorsements from others in the tech industry, including venture capital investor and Bitcoin advocate Tim Draper. Pierce also uses social media to ask his followers for input on his campaign policies, has held a “meme contest” to promote his 2020 run and is still potentially in line to face legal battles in the U.S. over his previous cryptocurrency ventures, according to Forbes.

In many states outside Oklahoma, Pierce already missed the deadline to make it on the ballot — a major hurdle to any kind of significant exposure to voters around the country.

While the 2020 election likely may not end with Pierce in the White House, he argues that his “macro-holistic perspective on the things” is a message now worth sharing on a political platform — especially in such a divisive era of American politics.

The novel coronavirus pandemic has killed more than 150,000 people and infected more than 4,244,600 million in the U.S., according to The New York Times, while it’s coincided with nationwide protests against racial injustice following the killing of George Floyd.

Pierce was once enamored by the chance to sit at the president’s Resolute Desk as a kid — before the decades he spent afterward: leaving Hollywood, becoming a businessman, becoming a father and a husband and, he says, outwardly looking toward the future for ways to improve himself and his environment.

“I measure my success in life by the positive impact I have on others and the world around me,” he says.

RELATED: Obama Reunites with Biden for First Time Since the Primary: ‘I’m Looking Forward to Working with You’

Pierce says running for president was “the most effective way to be of service” and that he has “a message from the heart” to share with voters.

Officially, his representatives say Pierce is running “to positively transform our nation and planet.” He tells PEOPLE his message is about self-awareness and a common ground unity with nature and history that he first began to consider when he was carving his name into that Egyptian pyramid years ago.

After four years of divisiveness under Trump — another politician grown under Hollywood lights — Pierce says that’s a question a voter should ask themselves before Nov. 3.

“Most of the time we often go, ‘Oh I can do that!’ ” he says. “You see an opportunity — a shiny object — and you just grab for it, instead of taking a step back and asking yourself, should I do this? Is this the right thing to do, for me? What is the impact of this? If I’m successful, what will be the results of it?”

Thu Jul 30 , 2020
New U.S. COVID-19 cases showed signs of trending downward Thursday while deaths in Florida rose sharply one day after the U.S. death toll surpassed 150,000. In Washington, D.C., President Trump suggested delaying the November election, saying reliance on mail-in voting due to the pandemic would be “inaccurate and fraudulent.” And the Commerce […] 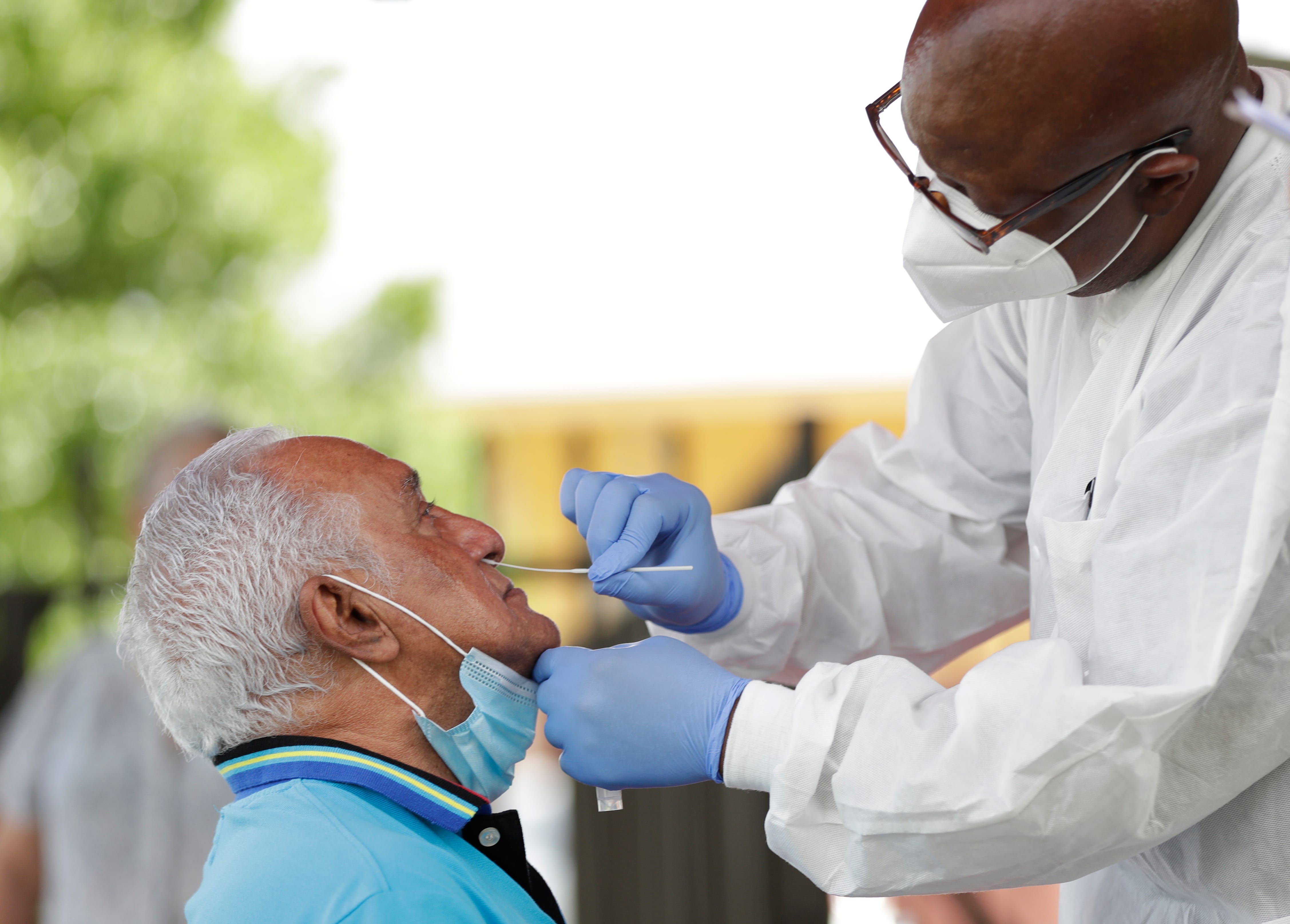