Between 1998 and 1999, while the rest of the tech world was preoccupied with the Millennium bug, a 27-year-old engineer at Japanese phone company, NTT Docomo, was working on a project that would define the next era of digital communication. Although he didn’t know it yet.

From his office in the Gifu prefecture, Shigetaka Kurita, was trying to create a way for customers to communicate through icons. For years his employer had been successful at selling pagers to Japan’s teenagers, and its decision to add a heart symbol to one device had proved popular. But as competitors quickly created similar features Kurita knew Docomo required more.

The result was a set of 176 icons in 12×12 pixels, which Kurita named emoji, a combination of two Japanese words: “e” for picture and “moji” for character. Drawing from manga and Chinese characters, as well as international bathroom signs, he covered everything from weather, to traffic, and modes of transport. Today Kurita’s symbols are such an integral part of popular culture they are exhibited in New York’s Museum of Modern Art.

Symbols in writing existed long before Kurita’s brainwave: the first Europeans were known for writing on cave walls in the Paleolithic Age, like the Chauvet horse in France or the Altamira bison in Spain. In an 1881 issue of Puck magazine, journalists drew four basic faces calling it “typographical art”. And in the 1980s, a professor at Carnegie Mellon University in Pennsylvania, Scott E. Fahlman, suggested that users of the school’s message board use 🙂 symbols to denote if they were joking or not (although he did have to teach them to read it sideways first).

Fahlman’s emoticons will be familiar to anyone who used email, SMS or chatrooms pre-2009 when a universal emoji alphabet was still unheard of. Behind the scenes, since 2007, Google had been leading the charge in attempting to get the Unicode Consortium (a nonprofit that maintains text standards across computers) to recognise emoji. In 2009, Apple also submitted a proposal. But it wasn’t until 2010 that Unicode finally realised they could no longer say no.

“Until that time when emojis went global, all our abbreviated digital messaging was missing some functions of communication,” Vyv Evans, a former professor of linguistics at Bangor University, tells The Independent. Estimates of how widely emoji are used vary: research from TalkTalk in 2015 estimated 80 per cent of Brits use them regularly, a figure which presumably has risen in the last five years. The word “emoji” was chosen as the Oxford Dictionary word of the year in 2015, showing how quickly it had become a household concept.

Despite widespread usage, contemporary commentary often pitted emoji as adolescent, a sub-par form of conversation. A 2018 study, conducted by YouTube, concluded emojis were “ruining the English language” because young people rely on them in lieu of actual words. But has a decade of emoji changed our communication for the worse?

Professor Evans believes far from widespread emoji usage being to the detriment of our language, it is advantageous. He explains that human communication is “multi-modal”, which means that when we talk face-to-face we rely on three main channels to convey our message: these are language (the words we use), paralinguistic cues (tone of voice) and kinesics (facial expression, body language and body gesture).

“If you want to say ‘I love you’ to someone you can change the meaning of those words just by the tone of your voice [your paralinguistic cue] – it can be a sincere declaration or an ironic blast to put them down,” he says. “Likewise we use kinesics – if you were ordering a pastry and just said ‘I’d like a croissant’ but pointed at a specific one, that is a non-verbal cue”.

Professor Evans says these modes provide nuance to our words and are particularly important for conveying empathy – “this is the basis of effective communication” – and for establishing “emotional resonance”, which is how we make friends, enemies, or any type of relationship. But when we communicate digitally two of these avenues are taken away.

Professor Evans says emoji brings back the lost functions. “Emoji fill in what we would do in person, imagine having a conversation and never making eye contact or being monotone. Emoji fulfill five basic functions: they replace words, reinforce words, contradict, compliment (explain) or empathise (eg. a love heart),” he says. “So this trope that emojis are the equivalent of an adolescent grunt – it’s a misnomer and misunderstands communication.”

Philip Seargeant, a senior lecturer of applied linguistics at The Open University agrees. “The most important role that emoji play is adding a layer of emotional framing to casual online written conversation. With the increasing use of social media in our lives, we spend a lot of time chatting via writing, and so emojis are a way of adding this back into the conversation. In that way they’re a digital solution to the way that modern communication has evolved.”

This depth of emotion is clear when you consider the most popular emojis in the UK, according to Apple – the cry laughing emoji, the red heart, and the crying face. It is also how Andy Murray tweeting a stream of emoji to represent his wedding day in April 2015 didn’t seem childish or flippant, but heartfelt and thoughtful. And it’s why dating website Match.com reports people who use emojis more in messages go on more dates and have better romantic relationships.

As well as conveying emotion, the rise of emoji has also allowed the expression of sometimes complex ideas. In 2016, The Times reported that a judge had used a ‘smiley’ emoji to explain evidence to two children in court, a research paper suggested teachers should use them in the classroom, and in 2014, the White House issued an economic report illustrated with emoji. In fact, there’s even a version of Moby Dick entirely in emoji, appropriately named Emoji Dick.

Seargeant says: “I think the media perception of emoji is still as quite frivolous, where in actual fact they’re increasingly being used in serious contexts. People use them to express solidarity in times of national tragedy [the bumble bee was used widely on Twitter following the Manchester arena bombings]; politicians use them in official communication [Penny Mordaunt marketed an anti-bullying campaign with emoji called #GoodMannersEmoji]; people are more likely to use them in work emails than they once were.”

In this way, Seargeant says, emojis can also align themselves as identity markers online. This has meant there is increasing importance to diversifying emoji; new emoji are released once a year (anyone can submit a proposal to add a new one) and since 2015 have been increasingly focused on diversifying the offering. There are now five skin tones, same-sex families, a Pride flag, a woman lifting weights and a buffet of global cuisine. This process has been described as the “Great Emoji Politicisation”.

“An example of identity markers was when Lady Hale wore a spider broach when ruling on the government’s proroguing of parliament, and lots of people sympathetic to the ruling began using a spider emoji in their Twitter handles,” says Seargeant. “Or emojis used by the Alt-right. There are examples of terrorists using them as a code,” he says. On the other side of the political spectrum was Lizzo’s use of the peach emoji to call for Donald Trump’s impeachment.

As well as allowing us to express complex or emotional ideas, emojis can also cross language barriers – words are localised but emoji are international. The power of this was demonstrated in 2017 when researchers from the Johns Hopkins Bloomberg School of Public Health and the Bill & Melinda Gates Foundation proposed an emoji mosquito as a way to better describe mosquito-borne illnesses like malaria and Zika (it was approved in early 2018).

Seargeant says that emoji are part of a general trend towards more visual communication, created by social media and the internet: “These changes include an upsurge in the use of visual communication online (with emojis joining gifs, selfies, memes etc in this respect); and a trend for informal, and often fragmented, conversation.”

Despite many still seeing emoji as a youthful pursuit, experts believe they are here to stay. “My guess would be that, at least for the next few years, emojis as we know them now will still continue to be used, not least because they’ve become so embedded in the culture, so replacing them with something altogether different would involve a big cultural shift,” says Seargeant.

The ability of emoji to adapt with the times (Spanish-language speakers have already got an emoji for coronavirus – the combination of a crown “corona” and the microbe emoji); the inclusion of it on university syllabus at King’s College London, Edinburgh and Cardiff as worthy of academic study; and the enhanced emotional connection it gives us online are all indisputable. Not least because with a global pandemic, lockdown and boom in remote working – the time we all spend communicating online is more crucial than ever.

How To Support Black Owned Businesses In Waltham

Fri Jul 17 , 2020
WALTHAM, MA — Amid civil rights demonstrations sparked by the death of George Floyd in Minneapolis, many are left wondering how they can help causes of racial equality and support the Black and Brown communities. At Black Lives Matter rallies across Greater Boston area speakers are encouraging participants and allies […] 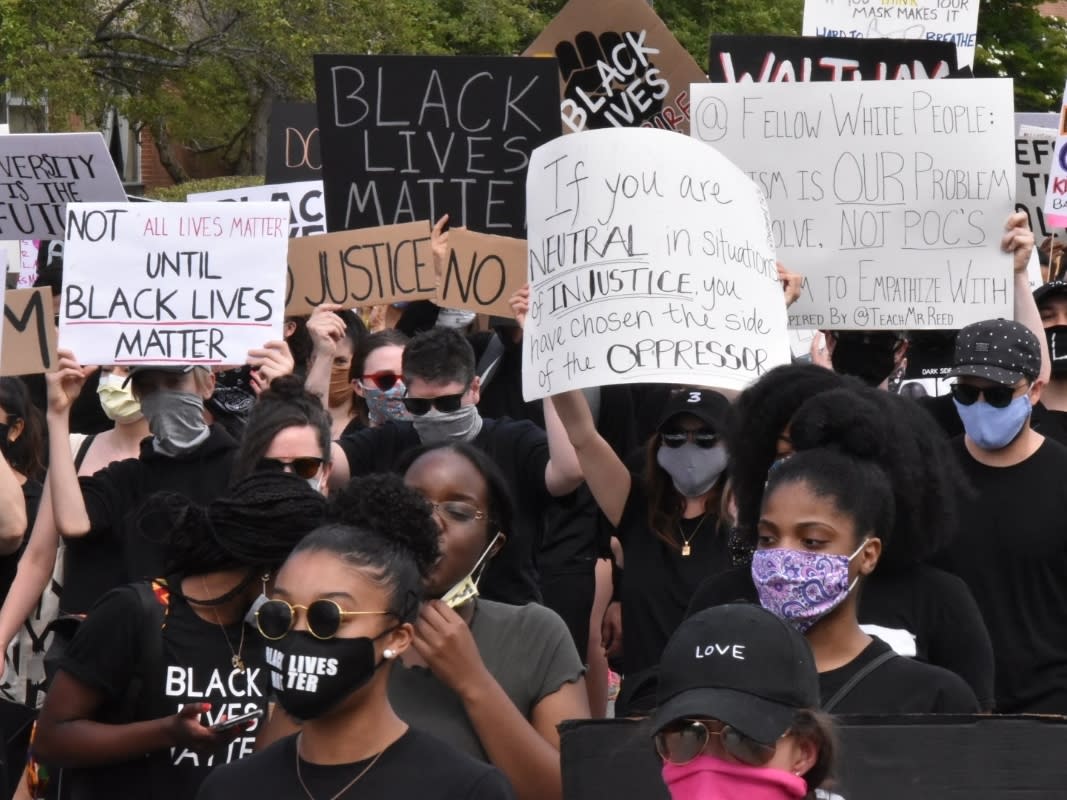