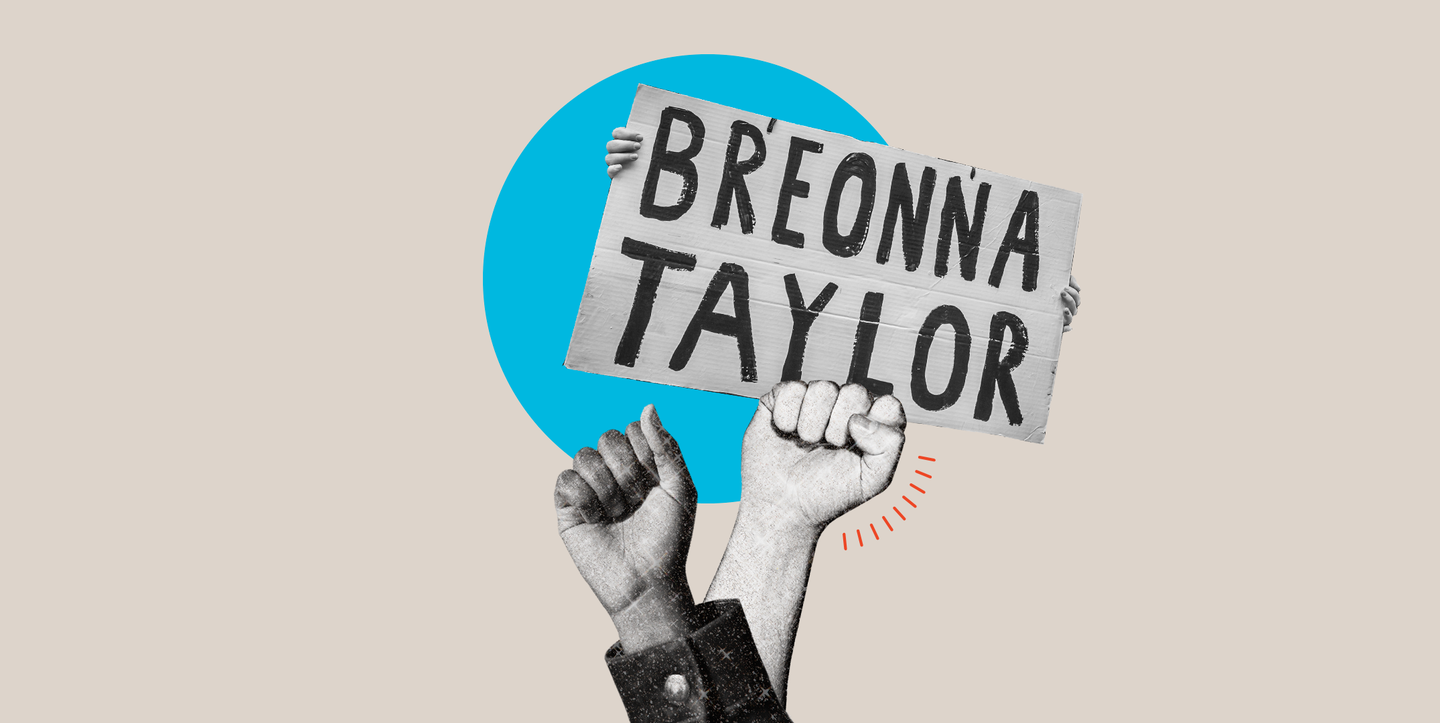 Breonna Taylor, a 26-year-old award-winning EMT, was killed by police officers shortly after midnight on March 13 in Louisville, Kentucky. Officers barged into her home while performing a raid at the wrong apartment before fatally shooting her eight times. Taylor’s murder has recaptured the world’s attention amid the recent Black Lives Matter and George Floyd protests—and people want justice for her.

It’s been four months since Taylor’s death, but the three officers responsible have still not been charged, despite protests, pleas, and even outcry directly from Beyoncé. It’s outrageously clear that people need to take a stand and do anything in their power to make sure justice is served in Taylor’s case.

Even though the Louisville Metro Council recently passed Breonna’s Law, which banned no-knock warrants, her mother, Tamika Palmer, says it’s not enough because the officers who killed Taylor are still free. She told ABC News, “Those [two employed police officers] are still being paid. [They’re] walking around as if they did nothing wrong. I’m definitely grateful that hopefully this doesn’t happen to another family, but for me, it’s no comfort.”

In an effort to keep Taylor’s name in people’s mouths and get the officers involved rightfully charged with her death, writer and culture critic Cate Young (aka @BattyMamzelle on Twitter) organized and created an official link where you can ensure proper legal action is taken in Taylor’s case in honor of what should have been her 27th birthday on June 5.

Breonna Taylor’s birthday is on Friday. I want to organize something to honour her and make sure she isn’t erased. Anyone have ideas/organizing experience and want to help?

Though Taylor’s birthday passed, below, you’ll find a list of things you can still do to honor Taylor and demand the justice she deserves.

This takes literally 30 seconds, so do it! You can add your name to Taylor’s petition on Change.org (it has 6 million supporters already!) to call for charges against the officers who killed her.

Donate directly to her family

While grieving the loss of their family member, Taylor’s family has been actively and tirelessly working to make sure that justice is served. Taylor’s aunt Bianca Austin created a GoFundMe for Taylor’s mom and sister, which allows the public to contribute to them financially during this time. No contribution is too small or too big.

While speaking to ABC News, Taylor’s mom stated that she is dedicated to ending police brutality and raising awareness about Black women who are killed by the police. She said:

“People don’t hear these stories about these Black women. But I’m now learning that I have a higher position in this fight and, and whatever I have to do to remain in it is what I’m going to do, because it should never happen to another Black daughter, another Black person, period.”

Use her hashtags and flood social media platforms

Go off on your social media accounts using the #SayHerName hashtag along with messages remembering Taylor. Utilize your platforms to make sure justice is brought to her case.

If you’re gonna post on your Instagram, make sure to tag these accounts: @GovAndyBeshear (governor of Kentucky), @RandPaul (U.S. junior senator from Kentucky), @LMPD (Louisville Metro Police Department), and/or @LouisvilleMayor (mayor of Louisville).

Even though many people’s social feeds have “gone back to normal,” that doesn’t mean it’s time to give up or that people forgot. Keep posting and let Kentucky officials know you’re still paying attention.

Protestors in Louisville, Kentucky—the city where Taylor was murdered—have been on the streets taking action and fighting for Taylor. And many of them have been arrested for it. Make a donation to their bail fund so they can continue to go out and protest.

Donate to The Loveland Foundation

Established in 2018 by writer and lecturer Rachel Cargle, The Loveland Foundation offers therapy to Black women and girls specifically. Cargle founded the foundation after raising more than $250,000 (!!). You can make a donation to this foundation in Taylor’s name and help the Black community—especially Black women and girls—get access to different kinds of healing, support, and therapy.

Take advantage of public info like phone numbers and contact the people who can make sure Taylor’s case is given proper attention.

Here are some numbers to get you started:

Or send some emails

You can easily do this on your phone, computer, or tablet. Write up an email urging officials to hold the officers who killed Breonna Taylor accountable and have them arrested for her murder. Your email can be a few sentences or a few paragraphs—whatever you think will make your voice (and Taylor’s case) heard.

Don’t know who to make it out to? Here are some email addresses to get you started:

Not a regular birthday card though. Young kick-started this whole project in celebration of Taylor’s birthday on June 5. She encouraged people to write a #BirthdayForBreonna card (or any type of letter) to the Kentucky Attorney General Daniel Cameron, Louisville Metro Mayor Greg Fischer, and state senators insisting they take action ASAP, hold officers accountable, and press charges against the police officers who took Taylor’s life.

Even though Taylor’s birthday has passed, the officers have not been charged yet, so sending letters demanding justice is still an effective way to honor Taylor.

Beyoncé took the time to write a letter to Kentucky Attorney General Daniel Cameron, so take a page out of her book. She published the letter on her site, asking for “swift and decisive action” against the officers.

You can easily send a card online using Postable. Send a letter to Attorney General Daniel Cameron, Louisville Metro Mayor Greg Fischer, and your state senator for just $4 to ensure that your outrage is heard.

Here are more guides for how to demand justice right now, how to support Black trans lives, how to find mental health resources if you’re a Black woman, how to talk to your relatives about Black Lives Matter, how to donate wisely, how to spot a fake protest story, and how to protest safely.