There was yelling. There was butt-kissing. There was Jeff Bezos forgetting to take himself off mute. Another congressional hearing where members of congress get to blast tech CEOs with questions – some crucial, some nonsense – is in the books.

As a hearing on anti-trust law, it was a historic moment of reckoning with the most powerful companies and people the modern world has ever known. It was also at times ridiculous and awkward, thanks to political theatrics, and the fact that all the CEOs appeared virtually via video conference because of coronavirus precautions.

Will it result in any action that impacts the might of Amazon, Apple, Facebook, and Google? We’ll have to see how Congress looks after the November elections. If the democrats gain control, the companies could be subject to more intense regulations and potential restructuring. If the republicans have their way, changes to the liability laws that govern freedom of speech online could fundamentally change internet and tech companies. Neither outcome is particularly great for Big Tech’s business.

Here are the biggest takeaways and moments from the House of Representatives’ hearing on anti-trust law in tech.

It’s always amazing when our elected officials seem to grasp technology concepts, and some members of the anti-trust subcommittee really did their homework! Although Tim Cook got off relatively easy, each CEO was hammered for the specific ways in which their companies might be in violation of anti-trust law.

“Big Tech is out to get conservatives:” Today’s antitrust hearing featured a not-unexpected outburst from Rep. Jim Jordan, the top Republican on the full Judiciary Committee who’s become a public face of GOP complaints that Silicon Valley is biased https://t.co/b06KZAHNY1 pic.twitter.com/PtGwRill9r

Republicans like Gaetz and Jim Jordan (R-OH) repeatedly claimed Google and Facebook were biased against conservatives, and that this bias affected how Google ranked websites and Facebook moderated content. This is supposedly related to antitrust because it paints tech companies as the big liberal oppressors over the republican little guys. In fact, the evidence of these claims is anecdotal, which is to say there is no actual evidence at all.

Reps asked questions about so much that had nothing to do with anti-trust – some valid, some inane

Listen, when you have four of the world’s most powerful people at your disposal, it’s understandable that you’d want to stray off topic from time to time. But even beyond the unjustifiable amount of time nonsense questions about political bias took up, representatives really went off book.

Some of the off-topic questions were valid. Rep. Lucy McBath took the opportunity to ask the CEOs to commit to improving diversity. How the companies were handling coronavirus information and misinformation also came up.

Other questions were clearly meant to elevate republican talking points. All four CEOs were asked whether China had been stealing their IP – a key argument in Trump’s anti-China agenda.

The CEOs of Apple, Google, Facebook and Amazon were just asked if they believe China steals technology from U.S. firms.

Cook: We haven’t experienced it.
Pichai: Neither have we.
Zuckerberg: Yes, absolutely.
Bezos: I’ve read that. pic.twitter.com/vbG2K1Dhq8

Sundar Pichai and Google’s “values” were questioned when asked why the company had canceled Pentagon contracts. Rep. Jim Jordan railed against cancel culture, and asked all the CEOs whether they thought it was a problem. Lord.

After Jordan posited coronavirus and anti-conservative conspiracy theories as fact in one of his questions to Pichai, his house of reps colleague Rep. Mary Gay Scanlon (D-PA) issued an epic burn.

“Gentlemen, I’d like to redirect your attention to anti-trust law rather than fringe conspiracy theories,” Scanlon said, addressing the CEOs.

This caused Jordan to explode in response, subcommittee chairman David Cicilline (D-R.I.) to bang his gavel and yell at Jordan to be respectful, and Rep. Jamie Raskin (D-MD) to repeatedly issue the congressional COVID version of telling Jordan to shut his damn mouth: “Put your mask on!”

Pramila Jayapal was a badass

Each time the representative from Washington had a tech CEO in her sights, magic happened. She honed right in on Amazon’s allegedly anti-competitive data collection practices, and got Jeff Bezos to go on the record not denying the issue (denial was Amazon’s previous stance).

Amazon’s Assoc. General Counsel told me under oath that Amazon does NOT, “use any specific seller data when creating its own private brand product.”

Reports revealed that was a lie: that they DO access data on third party sellers.

So I just asked Jeff Bezos which it is. Watch: pic.twitter.com/MiR7NHI7Y8

As she read Mark Zuckerberg’s emails about how he wanted to copy and acquire competitors (like Instagram), Zuckerberg delivered his patented ‘I’m in deep shit’ deer-in-the-headlights blink. She broke down the seemingly complicated nature of Google’s ads business, and compared it to an unregulated stock market, which left Sundar mumbling. All hail Pramila.

Some members of congress still didn’t understand the internet

One of the best parts of congressional hearings is when our elected officials are embarrassing about their tech knowledge. This hearing’s highlights? After referring to the internet as “the Net,” Rep. Sensenbrenner (R-WI) mixed up Facebook and Twitter, a distinction which Mark Zuckerberg kindly explained. Gloriously, Congressman Greg Steube (R-FL) asked why his campaign emails were going into his dad’s spam folder. You can’t make this stuff up.

Thu Jul 30 , 2020
WASHINGTON (AP) — The Latest on testimony before a congressional committee by the CEOs of Facebook, Apple, Amazon and Google (all times local): 6:30 p.m. Democratic chairman of a House antitrust panel says Facebook is making money off dangerous lies that could have deadly consequences. Rep. David Cicilline lodged the […] 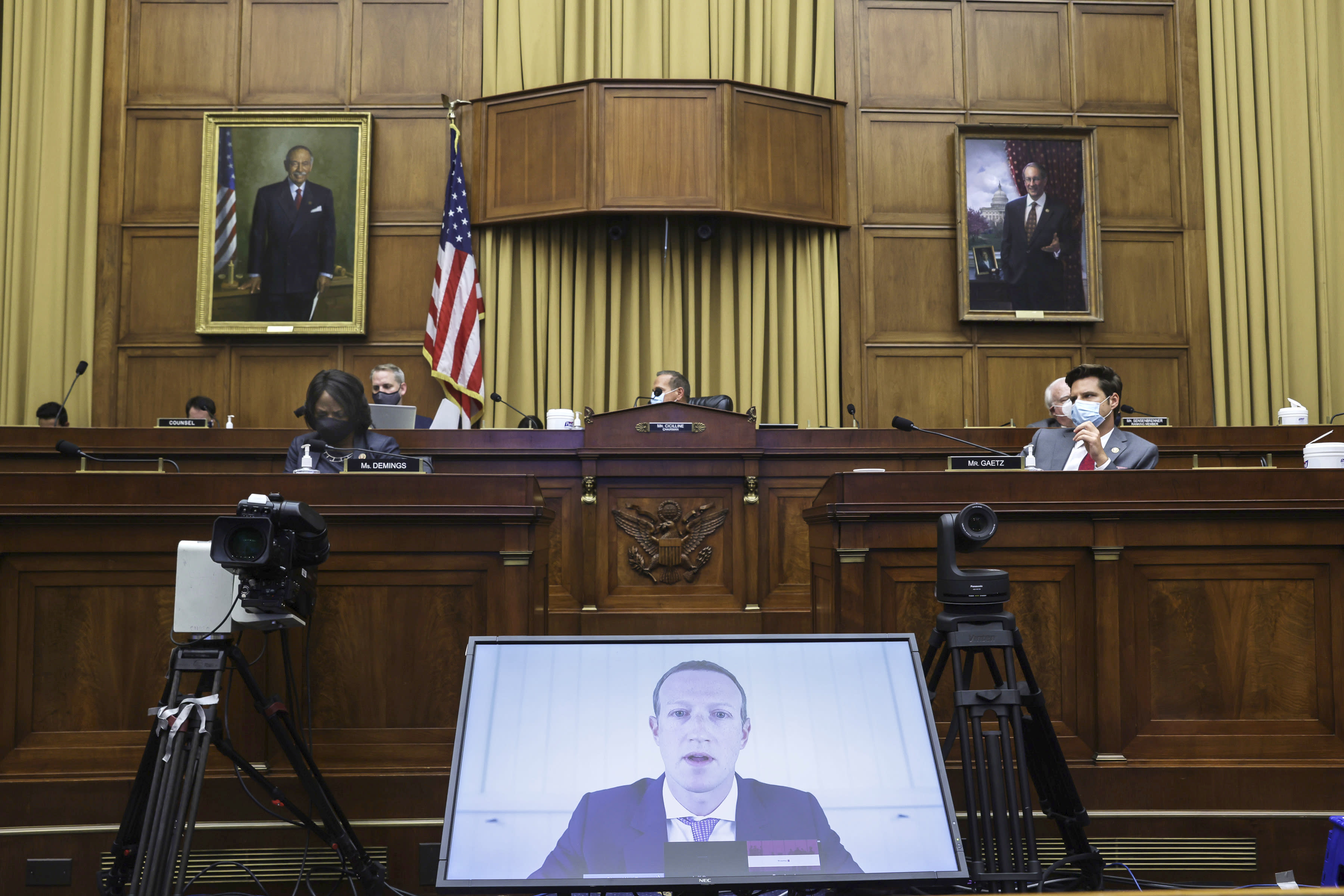