Wading into the contentious debate over reopening schools, an influential committee of scientists and educators Wednesday recommended that, wherever possible, younger children and those with special needs should attend school in person.

Their report — issued by the prestigious National Academies of Science, Engineering and Medicine, which advises the nation on issues related to science — is less prescriptive for middle and high schools but offered a framework for school districts to decide whether and how to open, with help from public health experts, families and teachers.

The committee emphasized common-sense precautions, such as hand-washing, physical distancing and minimizing group activities, including lunch and recess.

But the experts went further than guidelines issued by the Centers for Disease Control and Prevention and other groups, also calling for surgical masks to be worn by all teachers and staff members during school hours and for cloth face coverings to be worn by all students, including those in elementary school.

Regular symptom checks should be conducted, the committee said, and not just temperature checks. In the long term, schools will need upgrades to ventilation and air-filtration systems, and federal and state governments must fund these efforts, the report said.

Online learning is ineffective for most elementary school children and special-needs children, the panel of scientists and educators concluded.

To the extent possible, “it should be a priority for districts to reopen for in-person learning, especially for younger ages,” said Caitlin Rivers, an epidemiologist at Johns Hopkins and a member of the committee.

Mary Kathryn Malone, a mother of three children, has been eager for schools to reopen in Mount Vernon, Ohio, where she lives. Her 9-year-old daughter is pining for her friends, and her 3-year-old has only part-time day care — and not while Malone works.

But she was most worried about her 7-year-old son, who needs help for his attention deficit hyperactivity disorder and dyslexia.

“At one point, we were three full weeks behind on schoolwork,” said Malone, who teaches French at Kenyon College. “I was working through my own job, and when I looked at this mountain accumulating, it was so stressful.”

The American Academy of Pediatrics last month also recommended that schools reopen, a position widely cited by the Trump administration, which has been pushing hard for a return to something resembling normal life despite soaring infection rates in many states.

Most studies suggest the virus poses minimal health risks to children younger than 18. And the report said that evidence for how easily children become infected or spread the virus to others, including teachers and parents, is “insufficient” to draw firm conclusions.

Outside experts said they appreciated the report’s distinction between younger and older children.

But Jha and other experts noted that the committee did not address the level of community transmission at which opening schools might become unsafe simply because too much virus may be circulating.

“They punted the most critical question,” he said.

Committee members said the decision not to recommend a cutoff was deliberate.

“There is no single prevalence or threshold that would be appropriate for all communities,” Rivers said.

Rivers said schools would need to decide how and when to open, close and reopen schools by taking into account many factors, including disease levels in the community — and should plan for what to do when students or teachers become infected.

“Even with extensive mitigation measures, it’s not possible to reduce the risk to zero, and that has to be part of the discussions,” Rivers said.

Reopening schools should be a priority because schools fulfill many roles beyond providing an education, the authors said.

The report’s recommendations are largely consistent with those from the AAP, said Dr. Nathaniel Beers, who co-wrote the academy’s guidance.

“The only nuanced difference is that they have acknowledged the disproportionate impact on younger kids of not being in school,” he said.

While teenagers may be better able to learn online, they suffer the social and emotional consequences of being separated from their peers, Beers said.

“Adolescence is a period of time in life when you are to be exploring your own sense of self and developing your identity,” he said. “It’s difficult to do that if you are at home with your parents all the time.”

The new report is not “groundbreaking,” he said, “but it is helpful in affirming the touchy job ahead and the need for additional resources to do right by kids, educators and communities during this school year.”

Some 54% of public school districts need to update or replace facilities in their school buildings, and 41% should replace heating, ventilation and air conditioning systems in at least half their schools, according to an analysis by the Government Accountability Office.

“One of the shocks to me is that over 50% of the school buildings are awful,” Bond said.

New evidence suggests that the coronavirus may be airborne and that many indoor spaces may need better air filtration to prevent infections.

“Between now and September, you’re not going to be able to put in a new ventilation system,” she added.

In the meantime, schools may be able to opt for simpler solutions: Before the weather cools, they might emulate their counterparts in Europe and move classes outdoors, set up tents or build outdoor classrooms, said Jennifer Nuzzo, an epidemiologist at the Johns Hopkins Center for Health Security.

Schools may also need to hire additional staff to replace educators or other staff members who may not wish to return, the report noted, and to implement some of the recommendations, such as enforcing social distancing in the classroom or ensuring that groups of children remain with a particular teacher.

Some 28% of the more than 3.8 million full-time teachers in the country are older than 50, and about one-third of school principals are older than 55, age groups at high risk of severe illness from the coronavirus.

In one survey, 62% of educators and administrators reported that they were somewhat or very concerned about returning to school while the coronavirus continues to be a threat, according to the report.

“The school workforce issue is really not discussed that much,” Bond said.

Racial and socioeconomic inequities are another prominent concern. The communities where children struggle to learn in dilapidated, understaffed schools are also those hit hardest by the pandemic, said Keisha Scarlett, a committee member and chief of equity, partnerships and engagement at the Seattle Public Schools.

Remote learning is often difficult for children in low-income families. Nationwide, about 30% of Indigenous families and about 20% of Black and Latino families do not have access to the internet or have it only through a smartphone, compared with 7% of white families and 4% of Asian families.

Adults in these communities are also more likely to be essential workers who cannot stay home with their children, Scarlett said. Rates of hospitalization for COVID-19 are four to five times higher in Black, Latino and Indigenous populations than among whites.

The report also noted significant differences between rural and urban schools. Some 26% of people in rural districts and 32% of those living on tribal lands do not have reliable internet access.

Samuel Berry-Foster Sr., a sixth-grade science teacher, lives just outside Asheville, North Carolina, in a pocket of the Appalachian Mountains, with his wife and two school-age children.

For his family and for those of many of his students, Berry-Foster said, even a simple phone call can be plagued with delays and hang-ups. For more than one family member to be online at the same time is “impossible.”

“What we end up doing is driving about 8 miles to a little bitty library for broadband,” he said. “We sit in the parking lot and do our meetings and such.”

The CDC has provided limited guidance on reopening schools and largely puts the onus on district leaders to make judgments they may be unequipped to make.

The new report offers more detailed guidance for how to reopen, including a list of the kinds of experts to consult — such as epidemiologists who can interpret disease transmission rates. Local task forces should take into account the number of coronavirus infections, hospitalizations and deaths, and the percentage of diagnostic tests that are positive.

President Donald Trump has said that even the CDC’s less-detailed recommendations were “very tough and expensive.” But the new report’s recommended retrofits are likely to be out of reach for most school districts, costing roughly $1.8 million for a school district with eight school buildings and about 3,200 students.

Hoboken Gets $1.9M For Small Business, $8M For Coronavirus Care

Wed Jul 15 , 2020
HOBOKEN, NJ — U.S. Sen. Bob Menendez, Mayor Ravi Bhalla, and other officials announced on Wednesday that Hoboken small businesses can get $1.9 million in CARES Act funding, and that the city will also get $8 million for the city’s coronavirus expenses including testing, food for seniors, costs of disinfecting […] 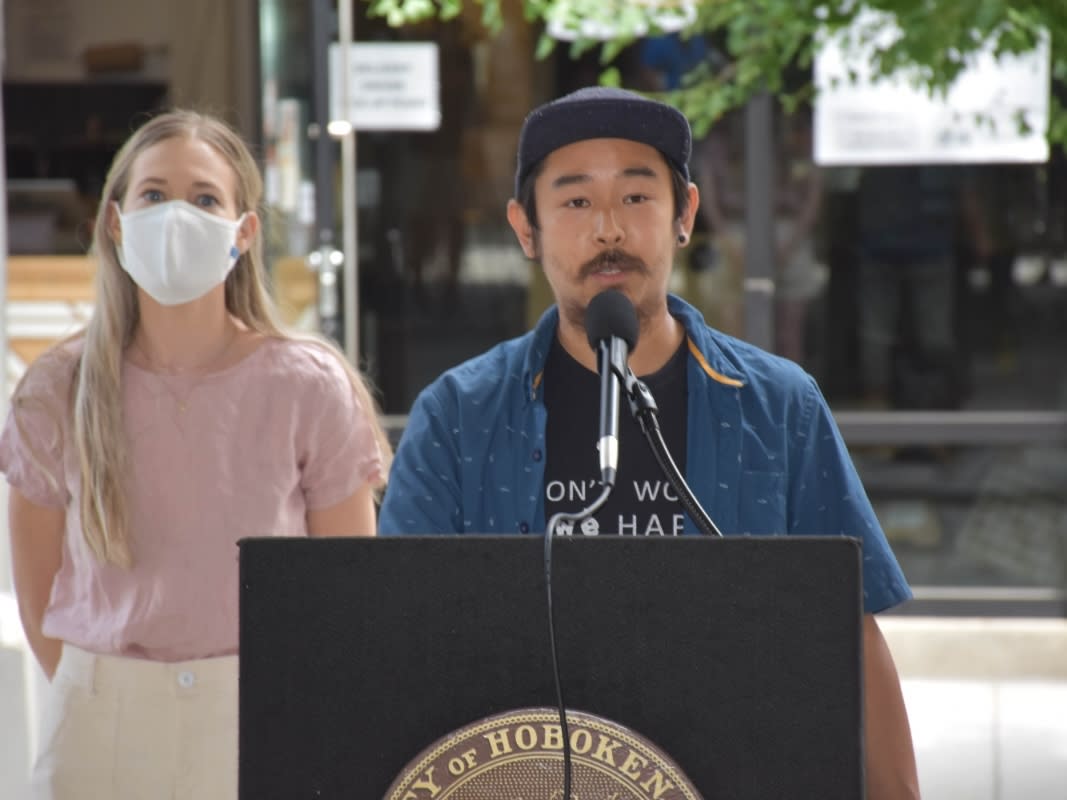