Cannabis entrepreneurs have agreed to drop a lawsuit over Los Angeles’ bitterly contested process for handing out licenses, after the city agreed to process more of the applicants vying to open new shops.

The Social Equity Owners and Workers Assn. and one of its members sued the city in April, arguing that the application process to open new shops was fatally flawed. Hundreds of people flooded the first-come, first-served system within minutes, hoping for a shot at just 100 licenses.

The association contended that more than 200 applicants who accessed an online platform before 10 a.m. — the official start time for applications — got an unfair edge over others who waited until 10 a.m. to log on. It had pushed for the city to stop handing out licenses for new shops as its lawsuit played out in court.

The group argued that “it is fundamental to any fair race that the competitors must start at the same time or, at the very least, be given accurate information about when the race will begin.”

City attorneys countered that few people actually started their applications before 10 a.m. and that Los Angeles pushed their applications back in line to where they would be if they had started on time — a process it called “normalization.” L.A. also pointed to an audit that found the city took reasonable and appropriate steps to prevent unfairness.

Halting the rollout of licenses for new shops as the lawsuit played out would only “allow the illicit market to gain a stronger foothold in the community in the meantime” and hurt entrepreneurs waiting to open their businesses, the city argued.

This week, a group of successful applicants also sought to intervene in the case, arguing that halting the licensing process or overturning it would hurt them financially. Some competitors, they argued, had simply been quicker to apply.

Under the settlement agreement with the Social Equity Owners and Workers Assn., L.A. agreed to make changes to its cannabis rules, including vetting the next 100 applications that were in line for licenses — possibly doubling the number of licensees from this round of applications.

Those changes were approved by the City Council last week, after the association signed off on the settlement. Mayor Eric Garcetti signed the agreement this week.

Kika Keith, co-founder of the association, called it “a great victory for us.” She is among the applicants in L.A.’s social equity program, which aims to help cannabis entrepreneurs from communities hit hardest by the war on drugs.

“Social equity applicants banded together and raised the money for legal fees to fight the injustice of the application process,” she said in a brief statement.

The added licenses will benefit many entrepreneurs who didn’t get their applications in the very fastest — including Keith herself, who is among the next 100 applicants in line — but hundreds more will still be out of luck.

L.A. does, however, plan to open another round of licensing for new shops. The next round of applicants will be selected based on a lottery system rather than a first-come, first-served system — one of many changes that city officials made recently in reaction to criticism of the previous process.

The Department of Cannabis Regulation declined to comment Wednesday on the lawsuit or its settlement.

‘No Way I Can Lose’: Inside China’s Stock-Market Frenzy

Thu Jul 9 , 2020
(Bloomberg) — Like millions of amateur investors across China, Min Hang has become infatuated with the country’s surging stock market. “There’s no way I can lose,” said the 36-year-old, who works at a technology startup and opened her first trading account in Beijing on Tuesday. “Right now, I’m feeling invincible.” […] 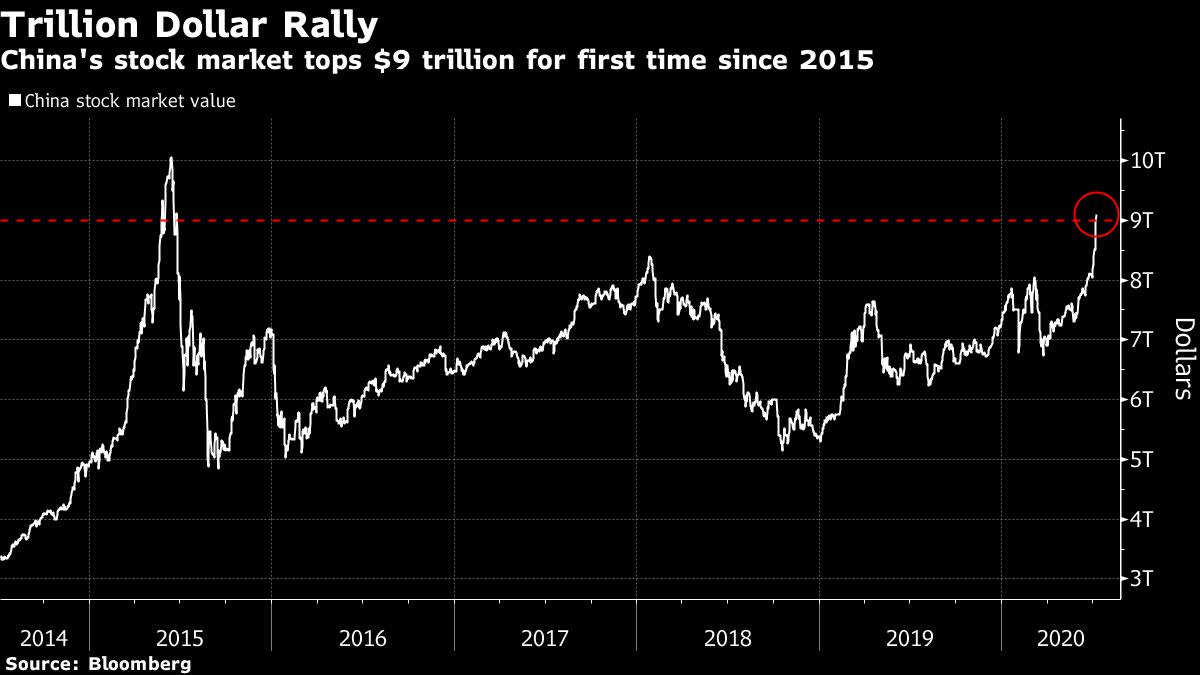