(Bloomberg) — Facebook Inc., Google and Twitter Inc. — all of which are blocked in the mainland — are now headed toward a showdown with China that could end up making Hong Kong feel more like Beijing.

Hours after Hong Kong announced sweeping new powers to police the internet on Monday night, those companies plus the likes of Microsoft Corp. and Zoom Video Communications Inc. all suspended requests for data from the Hong Kong government. ByteDance Ltd.’s TikTok, which has Chinese owners, announced it would pull its viral video app from the territory’s mobile stores in the coming days even as President Donald Trump threatened to ban it in the U.S.

Their dilemma is stark: Bend to the law and infuriate Western nations increasingly at odds with China over political freedoms, or simply refuse and depart like Google did in China a decade ago over some of the very same issues. Much like that seismic event shook the mainland in 2010, Big Tech’s reaction now could have a much wider impact on Hong Kong’s future as a financial hub — potentially sparking an exodus of professionals and businesses.

“Google is pretty important to people here, and if that’s cut off then it’s really extremely serious,” said Richard Harris, a former director at Citi Private Bank who now runs Port Shelter Investment Management in Hong Kong. “In Hong Kong we don’t know where the boundaries are, and that’s threatening to a lot of business people.”

Over the past week, Hong Kong authorities have begun explaining how they’ll enforce a law that officials in Beijing called a “sword of Damocles” hanging over China’s most strident critics. The legislation, which sparked the threat of sanctions from the Trump administration and outrage elsewhere, has had a chilling effect on pro-democracy protesters who demonstrated for months last year while also raising fresh questions for businesses.

On Monday night, the Hong Kong government announced sweeping new police powers, including warrant-less searches, property seizures and online surveillance. If a publisher fails to immediately comply with a request to remove content deemed in breach of the law, police can seek a warrant to “take any action” to remove it while also demanding “the identification record or decryption assistance.”

“We are absolutely headed for a showdown, and there are no indications that the Hong Kong government is particularly prepared if Facebook or another company refuses a removal request,” said James Griffiths, a journalist and author of “The Great Firewall: How to Build and Control an Alternative Version of the Internet.” “These companies appear to have realized that there is no compromise they could make that would truly satisfy Beijing or make them seem trustworthy. This could make them more willing to stand up against Chinese censorship in Hong Kong.”

American internet giants have made overtures toward Beijing in recent years as the market exploded, but few have so far actually acceded to China’s censorship framework.

Of the rare examples, Microsoft’s LinkedIn censors content to allow it to operate a Chinese version, while Apple Inc. complies with local regulations in policing its app store and other services. Reports that Google entertained the notion of returning — via potentially a censored version of search called Project Dragonfly — enraged lawmakers and its own employees torpedoed the idea.

Twitter and Facebook have never been consistently available in China, but Mark Zuckerberg also flirted with Beijing before abandoning the notion as regulatory scrutiny and a user backlash grew at home. In both instances, external factors helped scupper the feasibility of operating in the world’s No. 2 economy.

“I worked hard to make this happen. But we could never come to agreement on what it would take for us to operate there, and they never let us in,” he said last year in a speech at Georgetown University. “And now we have more freedom to speak out and stand up for the values we believe in and fight for free expression around the world.”

Still, the internet heavyweights are already censoring content across the world for both authoritarian regimes and western democracies, according to Ben Bland, a research fellow at the Lowy Institute in Australia. After a mass shooting last March in Christchurch, New Zealand, top social media companies joined with more than 40 countries in a concerted call to end the spread of extremist messaging online.

Germany has banned online Nazi and right-wing extremist content, and most countries have blocks in place against online pornography and criminal activity. In Thailand, strict lese majeste laws lead to censorship of content deemed offensive to the royal family, while Communist-run Vietnam expunges anything deemed “anti-state.”

Big tech companies must gauge the importance of the markets in China and Hong Kong with possible reputational damage in other places they operate, according to Stuart Hargreaves, a law professor at Chinese University of Hong Kong who researches surveillance and privacy issues.

“I do not expect to see the Great Firewall extended from mainland China to Hong Kong, at least in the medium term,” he said. “It is not necessary for Beijing’s goal of tamping down certain sentiments and would be the obvious end of Hong Kong as a global city and its particular role as an Asian finance hub.”

The exit of TikTok, the viral video app that has insisted it operates independently of Beijing, could actually benefit the Communist Party by removing a forum pro-democracy protesters have used to post videos calling for an independent Hong Kong. Last year, demonstrators used the Reddit-like forum LIHKG as well as Telegram to organize leaderless protests.

TikTok on Tuesday played up its U.S. ties while pushing back against comments by U.S. Secretary of State Michael Pompeo, who said the government is considering a ban of the short video app. Trump later said the move may be one possible way to retaliate against China over its handling of the coronavirus.

“We have never provided user data to the Chinese government, nor would we do so if asked,” a TikTok spokesperson said, adding that it’s led by an American CEO.

Platforms like Telegram that provide end-to-end encryption could become increasingly popular, said Joyce Nip, senior lecturer in Chinese Media Studies at the University of Sydney. Telegram said it has never shared data with Hong Kong authorities, adding that it doesn’t have servers in the territory and doesn’t store data there. Signal has become the most-downloaded messaging app in the city, topping the communications category in Apple’s and Google’s mobile app stores.

Hong Kong’s leader, Carrie Lam, didn’t answer a question Tuesday on her response to tech companies that stopped processing data requests from her government. Still, she played down any long-term impact on the city’s position as a financial hub around the same time that Pompeo released a statement blasting the Communist Party’s “Orwellian censorship” in Hong Kong.

There “has been an increasing appreciation of the positive effect of this national security legislation, particularly in restoring stability in Hong Kong as reflected by some of the market sentiments in recent days,” Lam said a day after local stocks entered a bull market. “Surely this is not doom and gloom for Hong Kong.”

The regulations stemmed from a new national security committee created by the law that includes Lam and Luo Huining, Beijing’s top official in the city. While China’s leaders know Hong Kong needs a free flow of information to function as a world-class financial center, “much seems to rest in the hands of the few newly empowered bureaucrats who will police the new laws,” according to Steve Vickers, chief executive officer of Steve Vickers and Associates, a political and corporate risk consultancy.

“Foreign firms are on something of a knife edge here, caught between their natural affinity with freedom of information and their commercial desire to operate in the huge Chinese market,” said Vickers, a former head of the Royal Hong Kong Police Criminal Intelligence Bureau. “It is now more a matter of what is actually done, as opposed to what is being said — by either China or the foreign IT companies — that will be the key.”

(Updates with Signal’s rise in the 19th paragraph)

Wed Jul 8 , 2020
Myriad Genetics, Inc. MYGN recently announced a collaboration with OptraHEALTH with the aim of implementing a cognitive ChatBOT, Gene. The AI-powered ChatBOT will provide genetic and financial assistance information to prospective patients of hereditary cancer. Notably, the Gene knowledge platform, which is a Health Insurance Portability and Accountability Act compliant, […] 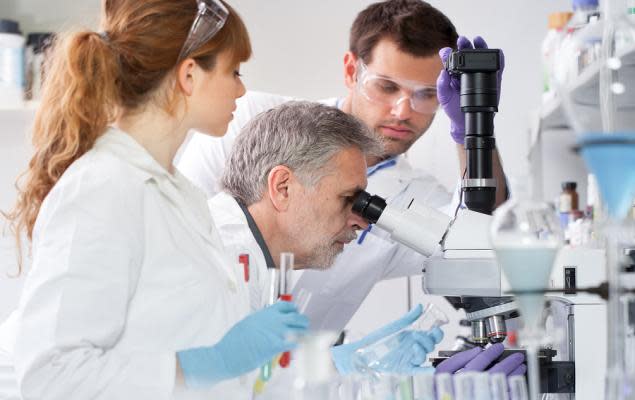