Picture this — cows walking on their own to the barn. A robotic arm reaches out to clean their udders. The “arm” attaches suction cups. The cows are milked. They leave and head back to the fields.

No humans touch the cows during the process.

No, this is not from a futuristic movie. This is 21st century technology that is firmly embedded in today’s farming business.

The marriage of farming and technology is not a new one, according to Liam Migdail, communications director at the Pennsylvania Farm Bureau.

“Using technology has been there for centuries,” Migdail said. “If you look at some of the inventions that we think of as being the most economically significant, a lot of them are an agricultural invention.”

Migdail cited the plow and the cotton gin as early examples of technology created for farming.

“When you look, over time, some of the advances in technology, those that have shaped our culture and changed the way we live, a lot of those started with agriculture,” he added.

It makes sense that advances in agricultural sector are integral to society, because everyone has to eat.

Robotic milking machines are very hi-tech, but there are other ways in which farmers are using technology everyday to optimize their operations in order to feed communities.

“Some of the ways that farmers are using newer technology now is exciting,” Migdail said. “Precision agriculture is really on the rise.”

“Let’s say you have a field of soybeans,” Migdail said, “and there’s different terrain and different soil conditions throughout that field. You are applying fertilizer or spraying an herbicide, something that you’re using to grow your crop.”

“Precision agriculture allows you to use very detailed data to know exactly what you’re applying to the field, how much,” he added.

Migdail said, for example, if a farmer has a field of two different types of soil in one field. In order to improve the condition of the soil which in turn will increase the yield, he might need to apply nitrogen to one side and some other nutrient to the other side. The old way of doing that was spraying a certain amount of the nutrient across the field or doing each half separately.

“What farmers are able to do now as they’re adopting precision agriculture technology, they’re using high tech data to assess what the conditions of their soil are and what exactly their crops need to grow,” Migdail said.

“Then they’re able to really precisely pinpoint what goes where on the field to the point that you could have a tractor that’s on autopilot and the farmer sitting in the cab just to make sure that nothing goes wrong,” he explained.

The tractor is communicating with satellites and using the data to put different things on different parts of the field based on the research in the data.

One of the benefits of using this technology is that it prevents the over-use of adding nutrients to the soil, which helps the environment.

“When you’re talking about protecting water quality, especially in places like the Chesapeake Bay. You don’t want nutrients running off your field because that can pollute local waterways,” he stated. “Precise technology allows farmers to use only what they’re need and to limit what they’re spraying.”

Not over-using also limits the costs of soil additives.

“Anything you put on your field, you have to pay for one way or another,” said Migdail. “It just makes economic sense for the farmer.”

It also benefits the crop yield which again is good for the farmer economically.

“Your crops are going to benefit from using data to know exactly what your crops need to grow, down to that acre needs this and this acre need something completely different,” he explained.

“That’s amazing technology to have in your hand because now you’re able to get that crop in the field exactly what it needs to thrive,” he added.

Now, back to robotic milking, which Migdail said is being adopted more and more in the farming community.

Prefacing his explanation with it’s not a robot in the science fiction sense, Migdail said that it’s basically an automated system that is totally different from the traditional way of milking which is a labor intensive process that is done twice a day.

“The cows are in the barn or in the pasture and there’s a couple of different way traditionally to milk the cows. A lot of time it’s milking time and the farmer, family members or employees, depending on the operation, brings the cows in from the barn or from the field. A lot of times they rotate through when they milk them. It takes a bit of manpower and it’s a process,” he said.

“With robotic milkers, the cow can be sitting in the barn or in the field and when she feels like she’s ready to be milked she goes over to the milker. There’s scanners that scan the udders and the underside of the cow. They know from that scan exactly which cow it is,” Migdail said.

The cow has and RFID tag which has an electronic code to identify the animal. This enables the farmer to detect health issues in the early stages that could be problematic in the future. This technology also allows the farmer to see how much milk each cow is producing, so that if a cow’s milk production drops or stops altogether, then the problem can be investigated.

Once the cow is scanned, a robotic arm comes up and cleans the udders, they connect and the cow gets milked. Usually there is food at the unit to keep the cow happy while she’s being milked, Migdail said.

When the process is complete, the cow walks out and then another cow comes in.

“That way you’re kind of moving away from the system of having milking time twice a day as opposed to when the cows are ready they come in and do it all on their own,” Migdail stated.

The system does have its drawbacks. One is the cost. It can be a big investment which is not feasible for smaller operations, although in the long term it would save money for the farmers.

“It allows them to do things better. When we talk about technology, that’s really the ultimate goal–to continue to farm, farm better, farm smarter. Do more with less money. Do more with less environmental footprint,” he stressed.

Another hindrance to installing this type of technology is the lack of broadband internet service in many rural areas.

“One of the biggest limiting factors we see is access to high speed internet,” he said, noting that broadband access is an issue in much of Lycoming County and the Northern Tier.

A lot of the technology relies on being able to communicate remotely.

“For example, the milking robots. A lot of the tech support that happens, happens remotely. Unless you have a good internet connection, that’s a very big limiting factor,” he said.

Migdail pointed out that not every farmer is ready to embrace the newer technologies.

Today’s breaking news and more in your inbox


(Editor’s Note: The story about the most recent Montgomery Area School Board meeting that appeared on Page A3 in …

Kano PC review: A Surface meant for the classroom

Fri Sep 25 , 2020
Design and construction Let’s start with the former. Kano originally caught the public’s attention by wrapping a Raspberry Pi board — which was cheap and capable, but overwhelming for the average parent — in a transparent case with a child-friendly assortment of colorful cables and dongles. The company even put […] 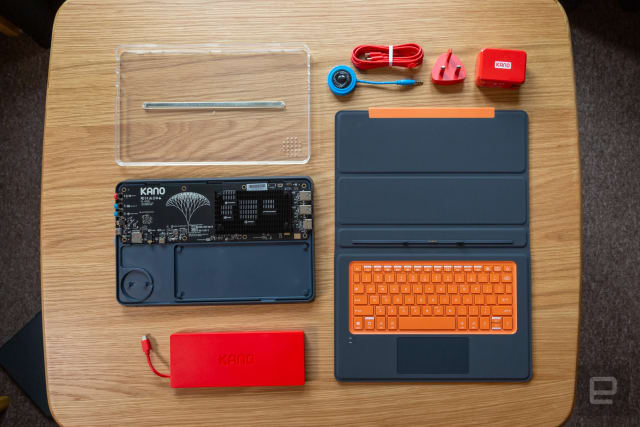